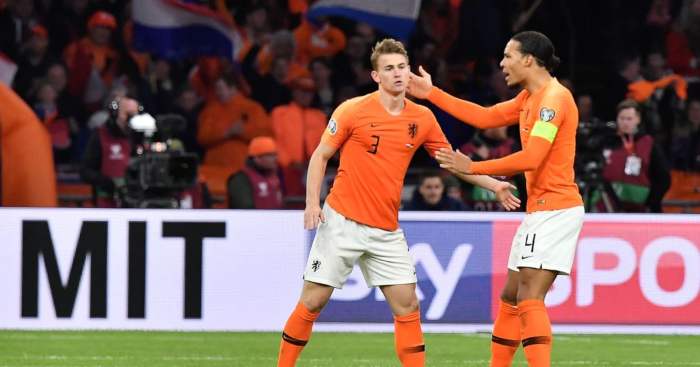 The Sunday Mirror reckons the potential transfer of Matthijs de Ligt to Liverpool would leave the club ‘facing dressing-room revolt’. The Reds are understood to be one of six clubs keen on the Dutch international and it still seems that nobody is closer to knowing which of those outfits De Ligt wants to join.

Liverpool will have to ‘tear-up their wage structure’ in order to get De Ligt on board with Paris Saint-Germain ‘prepared’ to pay him £256,000-a-week in wages, while Manchester United have apparently offered £236,000-a-week.

De Ligt’s compatriot Virgil van Dijk is understood to only be on £150,000-a-week at Liverpool, while the club’s top earner is Mohamed Salah on £200,000-a-week. The newspaper adds that manager Jurgen Klopp ‘knows he’d be inviting dressing-room trouble’.

A report from Spain in midweek claimed that De Ligt’s representative Mino Raiola only sees the centre-back – who is thought to be available for around €70million (£61.7m) – joining Liverpool or PSG and not Barcelona.

Real Madrid are ‘desperately trying to ditch’ Gareth Bale this summer and Man United reportedly have the answer to all their problems. The Sunday Mirror says that the Red Devils will ‘launch an audacious bid’ for the Welsh winger with an offer to take him away from the Bernabeu for 12 months on loan.

It is claimed the offer will include an option for the deal to be extended as Real look to reduce their wage bill over the next couple of seasons. Both United and Bale’s former club Tottenham rejected the ‘invitation’ from Real to make a £75million bid for the ex-Southampton man.

United though are prepared to pay a loan fee to sweeten any deal for Bale with the club’s hierarchy ‘desperate to make a big-name signing’ in an effort to ‘excite’ the supporters ahead of the new season. As well as a loan fee, the club will cover Bale’s huge £480,000-a-week wages that Real seem keen to get off their books.

Man Utd and Man City are considering a move for Leicester City defender Harry Maguire…City are also thinking about a £125m swoop for Maguire’s Foxes team-mate Ben Chilwell…Jesse Lingard is set to be offered a new deal at Man Utd worth £130,000-a-week…Jose Mourinho has told friends he would seriously consider becoming Newcastle manager…Arsenal are closing in on a double deal for Sampdoria’s Dennis Praet and Joachim Anderson…Tottenham will bid £40million for Bournemouth centre-back Nathan Ake…Yannick Carrasco is closing in on a move to Arsenal…Hoffenheim and RB Leipzig are interested in taking Liverpool youngster Harry Wilson on loan with the Reds willing to let him leave…David Beckham wants Antonio Valencia to join his new club Inter Miami in America…Man Utd midfielder Andreas Pereira is in line for a new four-year contract at Old Trafford.