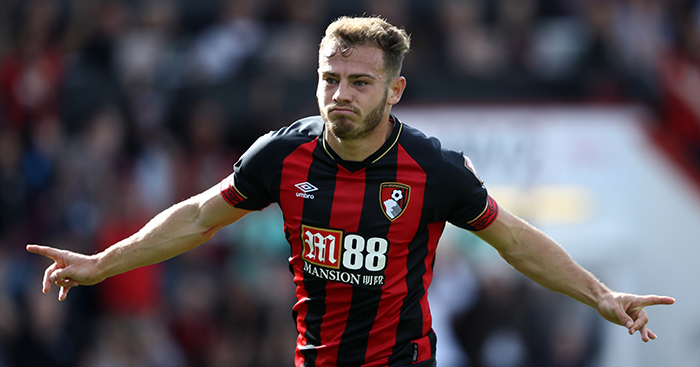 REDS ENTER RACE FOR IN-DEMAND FRASER
There is a big queue forming for the Premier League’s smallest player and apparently, Liverpool have joined it.

Ryan Fraser is set to have his pick of clubs this summer, with Arsenal, Manchester United, Chelsea and Everton having all been linked with the 25-year-old. The Sun claims Jurgen Klopp is also sniffing around the Scotland winger, who created more big chances than anyone else in the Premier League this season.

The fact he has only one year remaining on his Bournemouth contract makes Fraser particularly attractive but the Cherries won’t let him go cheap. Reports suggest they want £30million for their most creative player, which is not unreasonable when you consider the kind of sums being considered for other attackers who are also a year from free agency.

MAN UTD’S KOULIBALY BID REJECTED
Fraser is one of a number of wingers United are considering but it seems they have been somewhat more decisive in their quest to strengthen their defence. The Red Devils are reported to have gone big for Kalidou Koulibaly – just not big enough.

According to Gazzetto dello Sport journalist Nicolo Schira, United have tabled a £95million offer for the centre-half but Aurelio De Laurentiis knows Ed Woodward is desperate and the Napoli president is keen to take advantage.

If United are to land Koulibaly, it seems they will have to spend a huge chunk of whatever they get for Paul Pogba. TMW reckons a £138million price tag has been slapped on the wantaway France star in a bid to scare off interested parties. Real and Juve will probably be the least of Ole Gunnar Solskjaer’s problems if Pogba is made to stick around at Old Trafford.

AND THE REST
Arsenal have made an offer for Valencia goalkeeper Norberto Murara… Bayern Munich are confident of landing Leroy Sane… Chelsea are prepared to sell Eden Hazard to Real Madrid because of the FFP implications of him potentially leaving for free next year… Antonio Conte has agreed to take over at Inter Milan so Juve are pursuing Chelsea boss Maurizio Sarri…. Fernando Llorente is wanted by AC Milan, Marseille, Roma and Valencia… Spurs could replace the striker with Celta Vigo forward Maxi Gomez… Olivier Giroud will stay at Chelsea for another year.