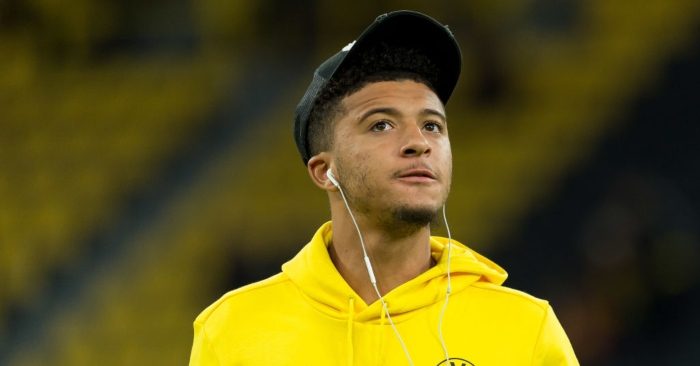 LIVERPOOL JOIN SANCHO ‘RACE’
Apparently Liverpool are the latest to show ‘firm interest’ in the Borussia Dortmund and England winger who will apparently command a £100m-plus transfer fee next summer. Shouldn’t you get more than ‘moments’ for £100m, though? He was hauled off after 35 minutes at the weekend and he wasn’t injured.

But this report from the Daily Mail clearly emanates from Sancho’s camp as we are told that events of this season – which featured Sancho being dropped for a late return from international duty – have left him feeling ‘unsettled’ and ready to leave this summer. Liverpool are listed as suitors along with Manchester United, PSG, Barcelona and Real Madrid.

SANE REPLACEMENT FOUND
Manchester City reportedly have a contingency plan that will allow them to sell Leroy Sane next summer to Bayern Munich (he is said to be ‘fixated’ on the move) in a deal said to be worth between £80m and £100m. That contingency plan is Real Sociedad forward Mikel Oyarzabal, according to the good folk of 90Min.

Helpfully, he has a buy-out clause so we know he will cost £68m, which would represent a record transfer for City. But they would be getting a 22-year-old who has already been capped six times by Spain and already has four goals and four assists this season.

AND THE REST
Danny Rose has vowed to run down his Tottenham contract…Willian is a target for Juventus and Barcelona…Inter Milan want Olivier Giroud in January…West Brom forward Jovan Malcolm is being monitored by Arsenal, Liverpool and Manchester United…Leicester are being linked with Metz’s Habibou Diallo.