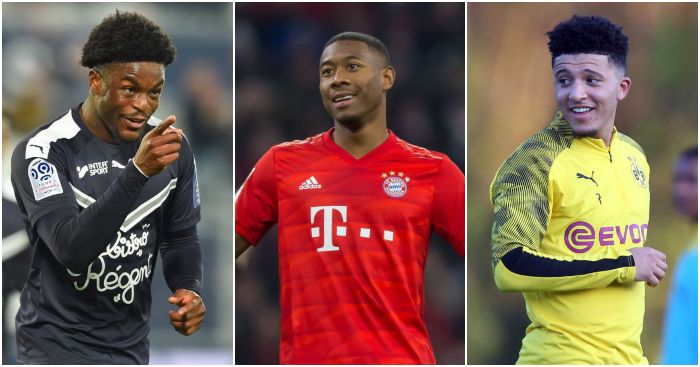 TRAORE TRAIL
While the gossip column must stress that pretty much anything featured here should be taken with at least two vats of salt, an extra helping is recommended for this 90MIN exclusive.

They claim that three clubs – Barcelona, Manchester City and Liverpool – want Adama Traore. City ‘have asked Wolves to keep them informed’ on his future. Liverpool ‘are also interested’. And he has caught Barca’s eye by being bloody rapid and developing an end product.

Wolves are aware and in control of the situation. They ‘will not consider selling’ for an offer of ‘any less than £70m’. And because Middlesbrough are really silly and did not negotiate a sell-on clause when Wolves signed him, the Premier League side are entitled to every penny.

CHELSEA SMILE
Quite why French website FootMercato would know so much about Chelsea’s transfer plans is a mystery, but they sure seem confident in what they report. The Blues, starved of making any signings in the summer, will feast this month.

They want Moussa Dembele from Lyon, with Olivier Giroud a possible makeweight after seeing a €40m (£34.2m) bid rejected.

They ‘would also pay attention to’ Josh Maja of Bordeaux and Leipzig’s Timo Werner.

They are in the queue to sign Jadon Sancho, but know ‘it will be necessary to leave a big check’ to convince Borussia Dortmund to let go.

They ‘would seriously consider making an offer’ for Isco.

They will probably extend Willian’s contract.

They probably won’t renegotiate Pedro’s; Fenerbahce, Aston Villa and West Ham would be interested, with Villa among those also chasing a loan for Michy Batshuayi.

They could sell Marcos Alonso to Inter Milan or Atletico Madrid.

They could also sign Papy Djilobodji in a frantic deadline day after failing to bring anyone else in because this is Chelsea.

MERIH CHRISTMAS
At least they aren’t after Merih Demiral. Goal.com say Juventus ‘are not willing to let him leave the club this month’ despite intense interest from afar.

Arsenal, Leicester and Borussia Dortmund have been linked with the centre-half, who made just one appearance in all competitions under Maurizio Sarri from the start of the season to December 10. He has started and impressed in all four of their games since, thus ‘has started to earn the trust’ of the manager.

Dortmund have already offered €40m (£34.2m) for the 21-year-old, with Leicester initially lodging a bid that was ‘significantly lower’ before matching the money the German side have put on the table.

Arsenal have yet to bid for Demiral, instead occupying themselves with indecent thoughts of Jerome Boateng. But they have cleverly cut out the middle man and just targeted the centre-halves Leicester want instead of letting the Foxes sign him and subsequently quadruple his value.

Still, either way Juventus won’t be letting him go. Back to the drawing board, folks.

AND THE REST
Barcelona have emerged as the frontrunners to sign Dinamo Zagreb’s Dani Olmo, despite both Chelsea and Manchester United having held talks over the 21-year-old Spain forward… Juventus hope they can sign Argentina striker Mauro Icardi from Inter Milan, despite Paris St-Germain having an agreement in place to sign the 26-year-old for £59.7m at the end of his loan spell at the club… Newcastle United’s English forward Dwight Gayle, 29, has been linked with Championship promotion hopefuls Preston… Newcastle want to sign Olivier Giroud on loan for the rest of the season but Chelsea have told them they will not let the striker leave unless they can bring in a replacement… Meanwhile, Chelsea want any club wanting to take English midfielder Danny Drinkwater on loan to pay the 29-year-old’s £110,000-a-week wages… Watford have joined Everton in the race to sign Carlisle’s 17-year-old English forward Jarrad Branthwaite… Sheffield United boss Chris Wilder is planning a move for CFR Cluj’s French striker Billel Omrani, 26, this month… Burnley’s English defender Ben Gibson, 26, is attracting interest from German sides Eintracht Frankfurt and Cologne… Crystal Palace manager Roy Hodgson wants two strikers in the January transfer window.