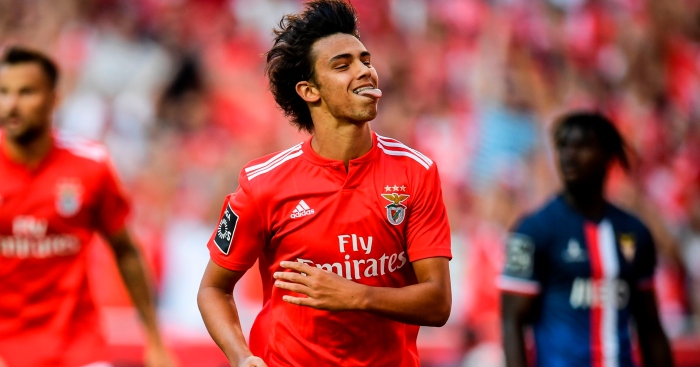 LIVERPOOL’S FELIX BID REJECTED
Friday brought news of Liverpool’s interest in the type of midfielder they already have dozens of. This morning offers some even fresher bullsh*t. Breathe it in…

According to a report from Correio da Manha in Portugal, the Reds have tried – and failed – in an attempt to sign Joao Felix from Benfica for a fee in excess of £60million. He’s a 19-year-old Portugal Under-21 attacking midfielder in the midst of his breakthrough season, since you asked.

A host of European big-hitters are monitoring the teenager, who has made eight senior starts for Benfica in 17 appearances, scoring six goals from positions across the front line. Liverpool apparently tried to get themselves to the front of the queue by submitting an offer of €70million but Benifca are demanding more for a lad with fewer than 400 minutes in Portuguese league football.

BAYERN UP THE ANTE OVER HUDSON-ODOI
Compared to Callum Hudson-Odoi, Felix is a seasoned veteran. The Chelsea winger was reported on Friday to have been offered a deal worth £50,000 a week rising to £70,000 a week, which seemed rather a lot for an 18 year-old yet to make a Premier League start.

Well, according to The Sun, Bayern have stepped up the crazy by offering Hudson-Odoi £85,000 a week to snub Chelsea’s offer and join them instead.

Maurizo Sarri is presumably rather more concerned with signing a striker, with Gonzalo Higuain said to be flying in just in time to face Tottenham in the Carabao Cup semi-final second leg this week. The Chelsea boss also wants a midfielder, with Zenit St Petersburg’s Leandro Paredes the most likely recruit, though Cagliari’s Nicolo Barella is still under consideration.

MONACO MAKE CONTACT OVER FELLAINI
Sarri could probably have Marouane Fellaini if he is so inclined. The out-of-favour Manchester United midfielder has picked up a calf injury just as it seemed he was likely to be ushered towards the Old Trafford exit, but that apparently hasn’t put off Thierry Henry.

According to RMC Sport, Monaco want to sign the big Belgian on loan for the rest of the season to pair up with Cesc Fabregas.

AND THE REST
Everton want Michy Batshuayi and are preparing a £40m deal for the Chelsea striker… Guangzhou Evergrande have made an offer of 40m euros (£35.2m) for West Ham’s Marko Arnautovic… The Hammers have failed in a similar bid for Torino striker Andrea Belotti… Crystal Palace want to sign Leeds winger Jack Clarke for £3m… Barcelona will sell Malcom if they can make a profit on the 41m euros (£35.2m) they paid Bordeaux in July.