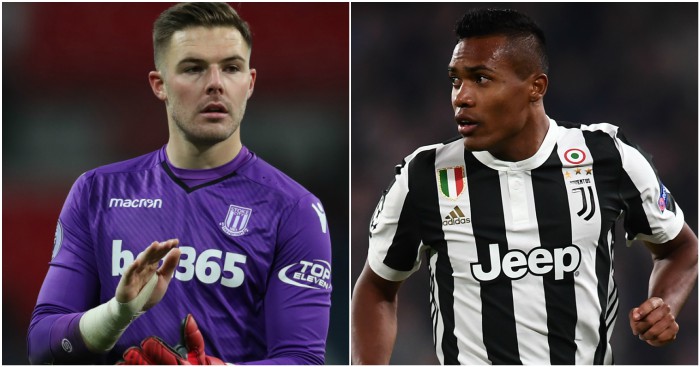 LIVERPOOL LINE UP BUTLAND
Having been linked with a move for ‘the Messi of goalkeepers’ over the last few months, Liverpool have apparently decided that Jack Butland is a better option than Alisson Becker.

The Sunday Mirror claims the Reds have switched their focus towards the Stoke stopper, preferring his Premier League experience. Also, at around £40million, the England keeper would be substantially cheaper than the Brazilian currently guarding Roma’s net.

The story suggests Liverpool’s interest is reciprocated by Butland. The 25-year-old would prefer a move to Anfield to work with Jurgen Klopp rather than join Arsenal and play under God knows who.

Stoke are seemingly resigned to losing Butland but they will take some comfort from the fact that he will fetch them a world record amount for a goalkeeper. Though with Real Madrid and PSG both on the look out for a new keeper – dare we suggest that’s a factor in Liverpool backing off Alisson? – whatever is paid for Butland would likely be eclipsed in next to no time.

UTD EYE TWO PART-EX DEALS
Manchester United are seemingly keen to use some deadwood to facilitate deals this summer for a couple of long-term targets.

Firstly, Jose Mourinho is said to have identified Alex Sandro as a priority, though Juventus are not willing to let the left-back go cheap.

They have previously stuck a price tag on the defender of around £70million. So, according to the Sunday People, Mourinho will double the Brazilian’s wages to £145,000 a week and he hopes to use Matteo Darmian as a makeweight in any deal.

The same story also suggests Daley Blind might be used in a similar way. United want Ajax’s Justin Kluivert so they want to return Blind back to the club they signed him from in 2014. Whether Ajax want Blind isn’t clear.

AND THE REST
PSG are not open to selling Neymar back to Barcelona or to Real Madrid…Borussia Dortmund are lining up Huddersfield boss and former assistant David Wagner to return as manager…Senior Arsenal players want under-fire boss Arsene Wenger to bring in Gunners legend Thierry Henry to spice up training…Swansea and Crystal Palace are ready to offer Andre Schurrle a sensational Premier League return…Manchester United, Manchester City and Chelsea are all looking at 17-year-old Heerenveen sensation Kik Pierie…Brighton are keen for FA technical director Dan Ashworth to become their director of football.

Chelsea’s longest-serving player Matej Delac is planning to finally leave the club this summer…Manchester City are set to lose highly-rated youngster Dilrosun with Newcastle and Swansea interested…Crystal Palace are happy to let Christian Benteke go to China for £20m in the summer…Juventus boss Massimiliano Allegri is ready to say yes to the Arsenal job if Arsene Wenger leaves the club in the summer…AC Milan are poised to make a move for Jack Wilshere after his eye-catching Europa League performance in midweek…Manchester City scouts are keeping tabs on Argentina striker Lautaro Martinez.