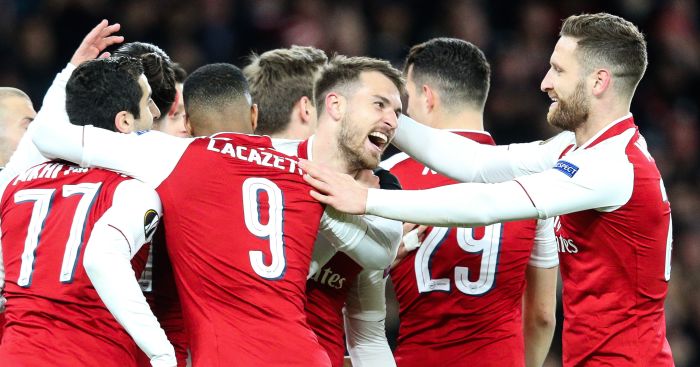 RED DRAGON
The future of one Aaron Ramsey has, in a way, never been more certain. His representatives have confirmed he will be leaving Arsenal at the end of his current contract, which expires at the end of the season. But the rest is, as of right now, a mystery.

He could head to Italy, where there is something of a Serie A circle jerk over the Welshman. AC Milan, Inter Milan and Juventus are all interested in him, but they could face competition from a little closer to home. According to the London Evening Standard, Liverpool and Manchester United are in the race too.

Both ‘are weighing up a cut-price January move’, with Ramsey’s preference being to stay in England with his young and settled family. Arsenal ‘believe there is a strong possibility’ that one of the two will make a move, with Liverpool ‘the most likely candidates’. Jurgen Klopp wants an alternative to Nabil Fekir as ‘it would cost in excess of £50million to revive’ that deal, and Ramsey ‘is likely to be available for less than half that figure’.

I am no mathematician, but that means Liverpool could get him for £25m or less. Right? Guys?

…WHAT DIVOCK IS COOKING
That does mean that there will be more outgoings at Anfield, too. And Divock Origi is likely to be towards the top of any list of transfer-listed players, with his impressive lack of a single first-team appearance this season. In fact, he hasn’t even been on a bench.

To that end, Galatasaray may be interested in rescuing him from his Merseyside purgatory. They want a replacement for new Al-Hilal signing Bafetimbi Gomis, and Origi ‘is among several names on the shortlist’.

Not that Liverpool will be in line for any money. The Turkish side are only willing to discuss a loan move, so any hopes of demanding £27m for the Belgian again have likely been dashed.

AND THE REST
Real Madrid are monitoring Raheem Sterling’s situation at Manchester Cityas the 23-year-old England forward enters the final two years of his contract… Manchester United are considering making a bid for Barcelona and Spain defender Jordi Alba, 29… United will initiate new contract talks with England midfielder Jesse Lingard, 25, in the coming weeks… Arsenal and Manchester United will face competition from Bayern Munich in their pursuit of Lille and Ivory Coast winger Nicolas Pepe, 23… Barcelona want 19-year-old Ajax and Netherlands defender Matthijs de Ligt as a replacement for Gerard Pique and 23-year-old Paris St Germain midfielder Adrien Rabiot, who is out of contract at the end of the season… AC Milan have beaten Liverpool and Manchester United to the signature of Flamengo’s 21-year-old Brazilian midfielder Lucas Paqueta.