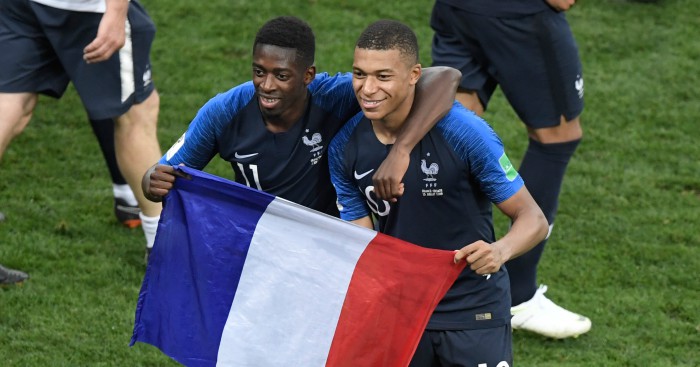 OUSMANE’S IS THIS?
It will take more than Ousmane Dembele’s agent insisting “there is no doubt about his future” to quash the constant speculation over the Barcelona winger. Moussa Sissoko (again, not that one) insists manager Ernesto Valverde “loves” his client, but The Sun throw a spanner in the works.

They exclusively claim that Liverpool are ready to break their club record to sign Dembele. ‘He fits the bill’ for Jurgen Klopp and massive laptop fan Michael Edwards, as they ‘want another wide forward’.

The Reds hope that £85million will prove enough to ‘rescue’ the Frenchman after a ‘frustrating’ year in Spain. The ‘misfit’ has been in and out of the Barca squad not just due to injury, but also because of form and competition.

Klopp is undoubtedly interested in the 21-year-old – he said as much as recently as May. But Dembele cannot firmly establish himself when put up against Lionel Messi, Luis Suarez and Philippe Coutinho. Is he really going to swap that for a position as lackey to Mohamed Salah, Roberto Firmino and Sadio Mane?

No. No he isn’t. And certainly not in January.

GOOD BAILLY
For more January transfer window news, we must go to Old Trafford. Which is more than most Manchester United fans have ever done. Hahahahahaha.

According to the Daily Telegraph, Jose Mourinho is busying himself making plans for the winter. On top of storing nuts in his mouth, the Portuguese is sifting through his squad to see who he can sell to raise funds to sign someone.

His desire for a new centre-half is so insatiable that he is willing to offload two of his current ones. James Ducker says Mourinho could try and cash in on Eric Bailly and Marcos Rojo ‘if it boosts his prospects’ of bringing in Milan Skriniar, Toby Alderweireld or A.N. Other.

The complication is as to ‘whether United would sanction the sale of Bailly’. The club stood firm when Mourinho wanted to throw Anthony Martial on the scrapheap, and they have been rewarded with a huge upturn in form. Bailly might not have been seen since being substituted after 19 minutes against Newcastle last month, but there is a player there. United will hardly be eager to let that slip from their grasp.

AND THE REST
Manchester United’s Spanish midfielders Juan Mata and Ander Herrera are both discussing new contracts at the club. The pair’s current deals expire in the summer… Red Devils forward Alexis Sanchez is frustrated by the lack of playing time at Old Trafford and could seek a move away in January… Tottenham are looking to make a £35m bid for Cagliari’s 21-year-old Italian midfielder Nicolo Barella… Bundesliga side RB Leipzig are ready to offer Wigan’s English attacking midfielder Nick Powell a pre-contract in January as his deal with the Championship club ends next summer… Bundesliga leaders Borussia Dortmund and Ligue 1 side Marseille are both interested in Arsenal’s 17-year-old midfielder Ben Cottrell… Crystal Palace and Fulham are interested in a January loan move for Fenerbahce’s Turkey international midfielder Ozan Tufan.