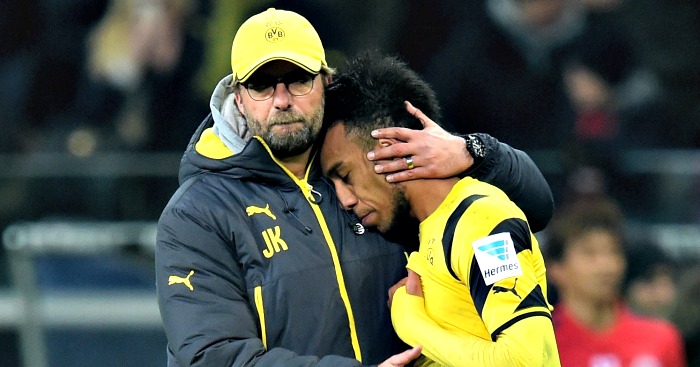 Wright then mentions a fee of £40m, before saying that those funds are available ‘if manager Arsene Wenger finally decides to spend big overhauling his squad’. Again, it was you that just said they wanted him.

CHELSEA WANT LUKAKU AND CANCELO
Well how lovely. Duncan Castles as stopped talking to Jose Mourinho for long enough to bring us a transfer exclusive on the Yahoo Sport website.

Castles claims that Chelsea plan a summer raid for Valencia right-back Joao Cancelo and former striker Romelu Lukaku. That’s amid reports that Conte is already planning how to avoid Chelsea’s post title-winning slump of 2015/16, with the club feeling the benefit of a lack of European football this season.

Another interesting line in the Castles report is his claim that Chelsea wanted a fee of €150m for Diego Costa to leave in January, and that Lukaku was targeted in January.

LIVERPOOL TO RIVAL MANCHESTER CITY FOR AUBAMEYANG
Ahoy there, and welcome to the good ship transfer guff. After the vessel was sat in port for a week following the close of the transfer window, it has now set sail and is clipping along at a rate of knots. Can you tell I’ve never actually been on board a sailing boat or yacht?

Aaanyway, The Sun have an exclusive from Paul Jiggins, and that exclusive is that Jurgen Klopp would quite like to sign Pierre-Emerick Aubameyang, one of Europe’s best strikers and a player Klopp has previously worked with. I know, we were shocked too.

Jiggins writes that Aubameyang would cost £40m – we’d be surprised if it isn’t more – and that the move would be funded by selling Daniel Sturridge to West Ham. Impressively, Jiggins manages to get through the piece without mentioning the words ‘Real’ or ‘Madrid’, the club who are the clear current favourites to sign Aubameyang.

Also, can we just have a moment for the abbreviation ‘P-EY’.

AND THE REST
Rivaldo’s son has joined Dinamo Bucharest… Barcelona are set to bid for Monaco’s young midfielder Bernardo Silva… Crystal Palace midfielder Yohan Cabaye has admitted he is “flattered” by interest from Marseille… Arsenal have agreed a deal for Nigerian wonderkid Lateef Omidiji Jr, according to reports… Thibaut Courtois’ agent is in contact with Real Madrid every day… Barcelona are ready to beat Manchester United to the signing of Benfica defender Victor Lindelof… Bayern Munich have rejected Barcelona’s offer for 18-year-old attacking midfielder Timothy Tillman.