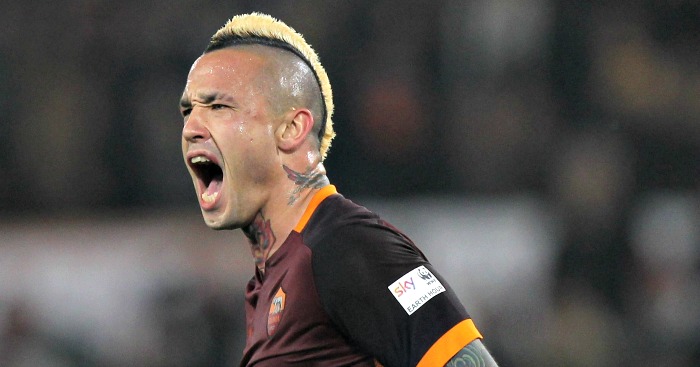 LUCAS IN TALKS WITH LAZIO
It seems likely that Lucas Leiva will finally leave Liverpool on a permanent deal this summer. The Brazilian has been regularly useful, but constantly kept on the periphery of the team under Jurgen Klopp.

According to those bastions of transfer rumour accuracy Calciomercato.com, Lucas’ next stop might well be Lazio. They say that Simone Inzaghi has put Lucas at the top of his transfer list as he looks to replace Lucas Biglia, who is probably off to Milan.

Is this just a cost-saving exercise so they don’t have to change the shirts? (No, because they have Biglia on the back now).

AUBAMEYANG TO CHELSEA, DORTMUND WANT GIROUD
Sometimes a transfer rumour just makes sense. Borussia Dortmund say that there have been no bids for Pierre-Emerick Aubameyang yet, but they may well come. Replacing him with Olivier Giroud is hardly a like-for-like switch, but we can see Olly fitting in beautifully over there.

It’s also a good switch for Giroud, who gets to keep Champions League football, have more chance of first-team minutes and stun an entirely new population with his good looks.

Anyway, the Daily Mirror claim that Aubameyang could join Chelsea and Dortmund respond to that by signing Giroud from Arsenal. We approve of both.

NAINGGOLAN THE TARGET FOR MAN UNITED
Jose Mourinho will not stop that hunt for a central midfielder. Having been knocked back on Eric Dier, not fancying Fabinho, struggling to convince Chelsea over Nemanja Matic and missing out to the same club on Tiemoue Bakayoko, it is Roma’s Radja Nainggolan who reportedly now tops Manchester United wanted list.

The Daily Mail say that Nainggolan is United’s alternative to Bakayoko and – crucially – Roma are ready to sell their midfielder. The Mail report that Roma would accept an offer of £40m for the Belgian, on the basis that they would rather he move abroad than to Serie A rivals Inter.

NASRI OFF TO ROMA?
Be honest, you’d forgotten that Samir Nasri was still a Manchester City player, had you not? It’s ok, it has happened to us all at some point this summer. We watched him wander off into the sunset (Sevilla) and assumed that was it.

Well, no. Nasri is back in Manchester and, while he is hardly an integral part of Pep Guardiola’s first-team plans, does need to have his future clarified. Nasri somehow only turned 30 last month, so still has plenty to give someone.

That someone might be Roma, if Nasri’s agent is to be believed. Here’s what Alain Migliaccio had to say.

“The player is still owned by Manchester City and we are evaluating several issues. There is the possibility of a transfer to China. With regards to Italy, there are two clubs interested who we have already talked to. They are top level teams.

“Monchi wanted him at Sevilla and knows him well. A city and a squad like Roma could certainly be very interesting for Nasri. That’s where the motivation comes from. Monchi knows what he wants and where he wants to go. He already has the project in mind: he sold important players, but has the right alternatives in his pocket.

“We want to understand the structure of the Roma option and work out if Samir can really fit into the Roma project. As far as we’re concerned, we want to evaluate the situation well and understand the project. Nasri really likes the city, but a move to Rome would also depend on who is leaving from the midfield: Monchi is evaluating it.”

AND THE REST
West Brom boss Tony Pulis is finally ready to cash in on Salomon Rondon… Leicester will step up their interest in Hull goalkeeper Eldin Jakupovic once they sell current No 2 Ron-Robert Zieler to Stuttgart… Chelsea left-back Baba Rahman is in the sights of Huddersfield boss David Wagner… Stoke City have emerged as favourites to edge out West Brom in the tug-of-war over Chelsea’s on-loan defender Kurt Zouma.