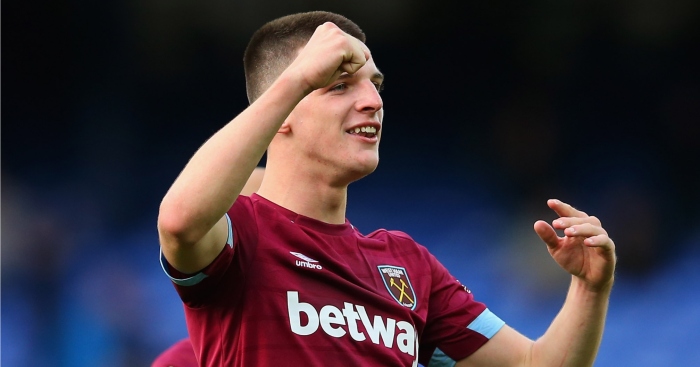 BRITISH INVASION
With just 21 players, Manchester City currently have one of the smallest squads in all of the Premier League. It is a number helped by being able to name Gabriel Jesus as an U21 player, which will not be possible as of next season.

The problem City face is that clubs are allowed to name only 17 non-homegrown players in their squad – a quota they have already reached. Only Fabian Delph, Raheem Sterling, John Stones and Kyle Walker are considered homegrown under the current definition.

So they will have to either sell some of their current non-homegrown players to maintain the balance if they are to sign new players, or they could simply sign homegrown ones. The latter option is one The Sun are championing.

They say that Pep Guardiola has three Premier League stars ‘at the top of his list’ for transfers in the summer. Declan Rice, ‘seen as Fernandinho’s replacement’, is the first and ‘would cost around £70m’.

He is also described as an ‘England midfielder’. Steady on.

Next are a pair of full-backs, who City are infamously reluctant to spend too much on. They are ‘hot on the trail of’ Aaron Wan-Bissaka and Ben Chilwell, much like the rest of Europe.

But the story suggests that they could land both for £40m each, which is where it all falls apart. That the article itself says City would see those price ‘as a bargain’ says it all: it’s far too low.

Wan-Bissaka is 21 and has more than three years remaining on his Crystal Palace, and Chilwell is 22 and committed to Leicester for more than five years. Both signed new deals within the last 10 months. Both are young, English players who fit the coveted homegrown quota. Both are currently with Premier League clubs who have no reason to sell, and so could justifiably ramp the price up.

So The Sun can take that £150m triple swoop and move it much closer to around £200m. How will they cope?

DECENT NICK
Guardiola might not stop there in his quest to Britify his City squad. They are one of a number of clubs to have shown an ‘interest’ in Nick Pope.

The future of the Burnley goalkeeper is up in the air, with the Clarets almost certainly having to shed one or two of their collection of goalkeepers. It was claimed that Arsenal could make a £10m move for him as a result.

The Daily Mail offer a little more insight, as they say that while Arsenal are ‘monitoring’ Pope’s situation with a view to bringing in ‘quality competition’ for Bernd Leno, they are not alone in keeping tabs on the 26-year-old. Again, his status as a ‘homegrown player’ has alerted many clubs to his availability.

Among them are City, Liverpool, Newcastle and Tottenham. One of these is not the same as the others.

AND THE REST
German side Bayern Munich have joined the growing list of clubs monitoring Palace’s Wan-Bissaka… Manchester United have identified Borussia Dortmund winger Jaden Sancho, 18, as their top summer transfer target, but they feel they would need Champions League football next season to lure the England international back to the Premier League… Manchester City are set to offer French defender Aymeric Laporte, 24, a new contract given his fine form this season… Chelsea head coach Maurizio Sarri will be sacked if they lose Sunday’s Carabao Cup final against Manchester City… Chelsea would be able to sack Sarri for £5m – the cheapest pay-off for a manager in the era of owner Roman Abramovich… Tottenham have joined the growing list of clubs monitoring 22-year-old Birmingham City striker Che Adams… Real Madrid are close to finalising a deal to sign 21-year-old Brazilian defender Eder Militao from Portuguese side Porto.