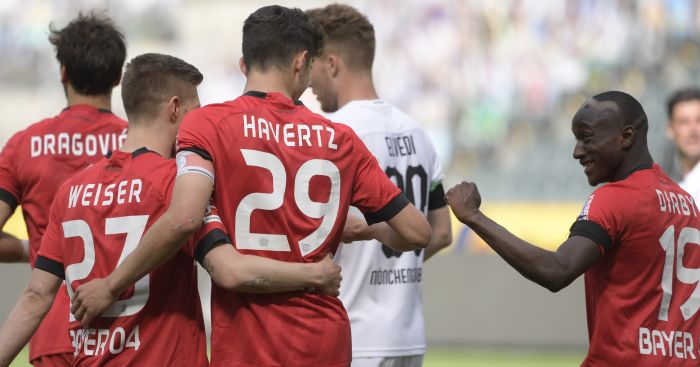 THE KAI AND JADON SHOW
Man United mean business this summer and that business could begin with a £50m bid for Kai Havertz, according to The Sun. They claim an exclusive that United ‘lead the race’ but we think that just means that everybody has noticed that the 20-year-old – one of the most valuable players playing outside the elite – has scored 11 Bundesliga goals this season, with the latest coming in Bayer Leverkusen’s 1-0 win over Freiburg on Friday night.

This is lumped in with the usual claims about Jadon Sancho, who scored a hat-trick on Sunday night to keep his valuation above the £100m mark. But our suspicions are roused by this paragraph – ‘United see former Manchester City youth player Sancho, 20, playing down the right, so Havertz would probably be on the left — with Marcus Rashford through the middle’ – which entirely ignores the fact that Rashford plays down the left and Havertz does not.

READ: The 20 most expensively-assembled Premier League squads in Europe

PSG ‘PLAUSIBLE’ FOR POGBA
We are told that Paul Pogba has three options this summer – Real Madrid, Juventus and PSG. Well, when we say ‘options’, what we mean is that those three clubs are interested. Which clubs can afford the asking price and wages this summer is another matter entirely. And we suspect that is why Le10Sport are now saying the Frenchman is open to the idea of the French champions. After all, we were told Madrid had pulled out of the race on Saturday.

We might be naive but we still believe he could stay at Manchester United and excel alongside Bruno Fernandes.

AND THE REST
Manchester United defender Axel Tuanzebe is wanted by Turkish giants Besiktas…Inter Milan want to keep Alexis Sanchez until the end of the season…Manchester City goalkeeper Claudio Bravo has emerged as a transfer target for Celtic.