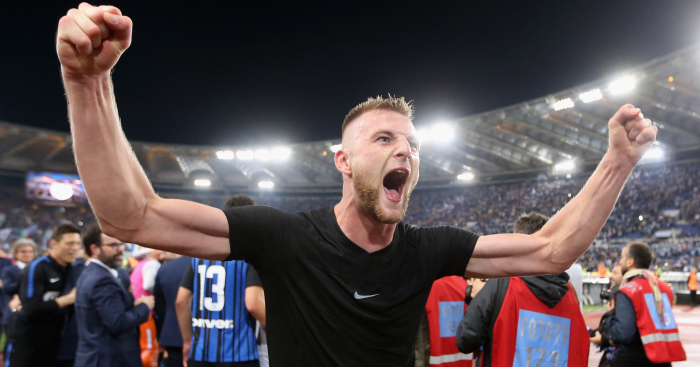 INTO MILAN
After ‘REVEALING’ Jose Mourinho’s ‘five-man transfer wishlist’ on Wednesday – which was actually just a collation of old rumours presented as a new one – The Sun are back on Thursday with an actual update. And they might not like it.

They will apparently face competition for one of their main targets, Milan Skriniar. The centre-half has been earning rave reviews at Inter Milan, so much so that Maurizio Sarri has had his head turned. Chelsea are interested too.

The Sun say the Italian is ‘facing growing issues’ in his Chelsea defence, namely ‘ageing players’ and ‘frustrated youngsters’. And the only way to placate said youngsters is to sign someone else for £70m.

‘The Italian isn’t fully satisfied with the way his squad is performing and thinks he can get much more out of the team with a reshuffle,’ apparently. Does he know they’re third and unbeaten?

Skriniar is said to be ‘frustrated’ himself as contract negotiations with Inter rumble on. It seems to be a straight race between Chelsea and United for the ‘£70 million-rated star’.

Milenkovic has been linked previously, with United thought to have considered a £30m move. But this seems a little more concrete: Sky say ‘Mourinho is interested in signing Milenkovic in January or in June’, which seems awfully specific. Why not July?

He will not come cheap, of course. Fiorentina turned down a £36m offer from an unnamed club in the summer, so United ‘could’ have to cough up ‘at least £50m’ to sign him. Arsenal and, again, Chelsea are interested.

An interesting footnote: Sky say Joachim Andersen of Sampdoria is their alternative target. Italian newspaper La Republicca had that story about two weeks ago, guys. Tottenham have already been quoted a fee of at least £26.1m.

TURKISH DELIGHT
It is quite the headline from the Liverpool Echo – ‘The former Liverpool transfer guru still having say on Anfield deals’ – as we are told that Joel Matip and Divock Origi are both wanted men. That sounded a lot sexier at first, didn’t it?

The story is basically a confirmation that Galatasaray want Origi, and Fenerbahce are in for Matip. And with Liverpool’s former director of football now overseeing transfers at the latter Turkish club, he really is ‘having say on Anfield deals’. Not much of a say, considering the decision is still Liverpool’s, but a say nonetheless.

AND THE REST
Stoke’s former Scotland midfielder Charlie Adam, 32, has not ruled out a return to Rangers to link up with manager and former Liverpool team-mate Steven Gerrard… Newcastle United’s English striker Dwight Gayle, 28, will push for a permanent move to West Brom next summer… West Ham’s English defender Reece Oxford, 19, wants to stay in the Premier League if the Hammers force him out in January… River Plate’s 20-year-old Argentina midfielder Exequiel Palacios will have his £22.3m move to Real Madridconfirmed after the Copa Libertadores final.