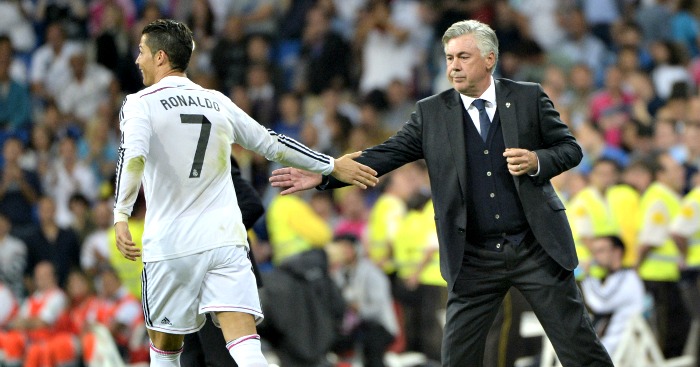 DOUBLE DEAL FOR UNITED
Manchester United are appointing Carlo Ancelotti as manager and are signing Cristiano Ronaldo too.

That’s the big (and ridiculous) news from the Daily Star. According to spurious gossiper-in-chief Jamie Anderson, ‘Man United could secure incredible double deal if Louis van Gaal is axed’.

It’s based on a) the rumour surrounding Ronaldo returning to Old Trafford which has been in circulation since the dawn of time, b) quotes from Ronaldo praising Ancelotti, and c) quotes from Ancelotti talking about the United job. Considering said quotes were made at the start of last week, it’s weird how this story has only just surfaced, considering it’s based solely on conjecture. No sources, no nothing.

No, this time it’s respectable Italian newspaper Gazzetta Dello Sport, and we have yet more Manchester United news. Guillermo Varela is off to Napoli. Google Translate, activate.

‘The right side Uruguayan has found little space inranks of the Red Devils and his future could be Italy,’ states their report, which adds that Varela ‘would like more space’, with Napoli ‘examining the situation closely’. We expect they examined United’s last three games in which case, with Varela making his debut and earning his first ever start for Van Gaal’s side within the space of a week. Mind you, a defeat to Bournemouth at the weekend could persuade him.

After various claims on the future of Paul Pogba, Mundo Deportivo add: ‘A Marco Verratti what draws him is the Premier , where it has received numerous offers, from Chelsea to two teams of Manchester , through the Arsenal.’

Wait, what? Chelsea, Manchester City and Arsenal are also mentioned. Why are only United referred to in the BBC’s snippet? If you can’t beat them, join them, it seems.

KIESSLING. LIVERPOOL. STRONG HINT. TRANSFER STORY
Right, let’s wrap this up. There is only one possible destination for our last rumour.

‘Liverpool target Stefan Kiessling strongly hints at Bayer Leverkusen exit in January transfer window,’ reads the headline on a piece from The Metro’s Tom Olver. So, what’s the ‘strong hint’? Do The Metro have pictures from Kiessling’s bedroom, adorned with Liverpool bedding, with a shrine dedicated to Kenny Dalglish in the corner? Has Kiessling revealed his love for a European night at Anfield? Has he been playing as Liverpool on Football Manager? Has he confessed that he is a hug addict, and wants Klopp to be his dealer?

Nope. In fact, he’s said some actual words to some actual people. Here is what the Bayer Leverkusen striker said:

“I’ve given it some thought and I will keep thinking about it. The situation is that of course I would like to be playing – I’ve been here for 10 years and love this club and everybody knows how happy I am here. I’ve got a pretty good relationship with the fans and of course also with the club. I love playing here and I love this club, and it’s overall a very, very difficult situation for me and everybody knows this.”

Translation: Come and get me, Jurgen Klopp, you big sexy man.