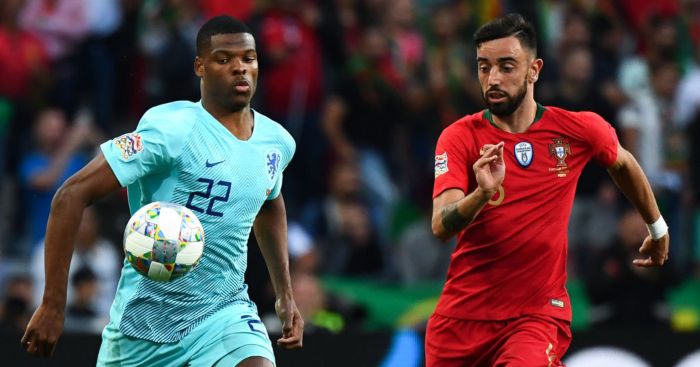 UNITED FRONT
Daniel James is done, and bloody miles better than Memphis Depay. Aaron Wan-Bissaka is sorted, even after Manchester United contemplated calling it off altogether. So who’s next?

United are said to be ‘confident they will get a clear run’ at both. They are quite hilariously ‘the only top-flight club to express an interest’ in Longstaff, and are content enough to wait for Newcastle to appoint a manager.

As for Fernandes, Manchester City ‘dismissed any prospect of a move’ recently, Tottenham have ‘no plans’ to compete for him, and Liverpool refuted claims they were interested on Friday.

It all means United are in no rush and have ‘taken their time’ over both deals. The identity of the third transfer Solskjaer wants is not revealed – although Harry Maguire is name-checked.

SO INTER YOU
How will United possibly raise the funds to finance such deals? Most of their £100m budget has already been set to one side, with Longstaff (£30m) and Fernandes (£62.8m) hardly coming cheap.

Inter Milan have certainly provided a boost in that regard. They are ‘flogging two stars’ in Joao Mario, bound for Monaco in a £22m deal, and Dalbert, who is headed to Lyon for £18m.

The Sun kindly point out that ‘would take Inter over half way towards the figure United want’ for Lukaku, who has been valued at the same £75m they signed him for two years ago. Their derisory opening offer will almost certainly be rejected, with United wanting £40m in a ‘down-payment’.

Inter are even prepared to let go of Borja Valero and Radja Nainggolan, with Antonio Conte ‘desperate’ to offload Mauro Icardi. They ‘are keen to prove they are serious about’ getting Lukaku in.

LESS IS MOR
As we all know, discussing Romelu Lukaku is impossible without mentioning Alvaro Morata. Which takes us to the Daily Telegraph’s claim that Chelsea ‘have warned’ Atletico Madrid over the forward.

Matt Law exclusively tells us that Chelsea have told the Spaniards they will recall Morata unless his loan move is made permanent this summer. The Blues ‘have the option to recall’ him early in this transfer window unless Atletico sign him, although quite why they would want to get him back at Stamford Bridge is unknown.

But ‘Chelsea are prepared to exercise that right’ unless they receive a cool £50m for Morata’s services, which ‘will be a huge concern’ for the forward. Atletico are already sending more than £100m Benfica’s way this summer, and though Chelsea need to replace Eden Hazard’s goalscoring ability, Morata’s stay in London has hardly been an enjoyable one.

AND THE REST
Real Madrid may have to pay as much as £150m up front to sign France midfielder Paul Pogba, 26, from Manchester United… The family of Tottenham Hotspur midfielder Christian Eriksen have been seen house-hunting in Madrid, where the 27-year-old Denmark international would like to move this summer… A meeting was held between Real and Atletico Madrid chiefs over the proposed transfer of French forward Antoine Griezmann, 28, to the Bernabeu… Barcelona might sign Romania legend Gheorghe Hagi’s son Ianis, 20. In two seasons at FC Viitorul the playmaker has featured in 45 matches and scored 16 goals… ​Arsenal, West Ham and Crystal Palace are all considering offering former Chelsea and England defender Gary Cahill, 33, a contract.