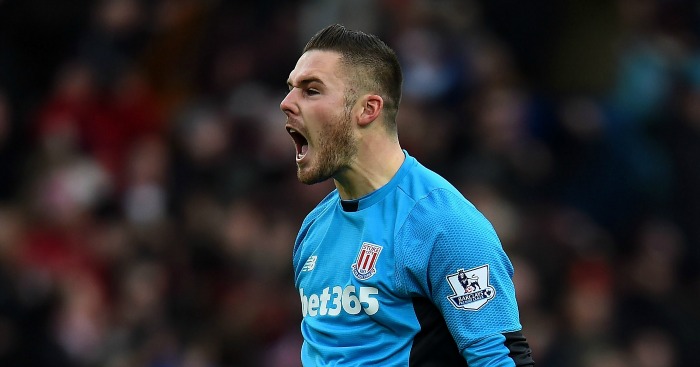 JACK THE RED
‘Manchester United are plotting a shock move for Stoke City goalkeeper Jack Butland,’ is the big line from Sami Mokbel of the Daily Mail. That, my friends, is juicy.

It does come with a particular precursor, mind you. Mokbel adds that while United are keen on Butland, it is only in the event that David de Gea leaves for Real Madrid. Which is unlikely, given their whole registering players ban.

Nevertheless, Butland is said to be ‘prominent’ on a list of potential replacements for the Spaniard, which is understandable, given his recent form. The 22-year-old only extended his current deal at Stoke in March last year however, and he has three-and-a-half-years remaining on that contract. He won’t come cheap, and that’s only if United sell De Gea.

MIRROR, MIRROR
Good news: The Daily Mirror will not be publishing a single transfer rumour related to Manchester United for the rest of this January’s transfer window. That’s a safe assumption anyway, what with their back-page exclusive on Friday.

According to David Anderson, United ‘have put their major transfers on hold’ due to the uncertainty surrounding Louis van Gaal’s future as manager. Anderson adds in no uncertain terms that Van Gaal ‘will not survive’ if United fail to secure Champions League football for next season, and that the club have ‘placed their big deals on the back-burner’ this month.

It’s hardly ground-breaking, is it? United have been linked with numerous players in this window, but all rumours seemed fanciful. Felipe Anderson of Lazio was at one point certain to join, according to most outlets, but that has surprisingly (unsurprisingly) not come to fruition. With ten days of the transfer window remaining, the Mirror claim an exclusive that United are signing no players.

Elsewhere, on the Mirror website’s live transfer blog, is the following line: ‘Manchester United are yet to make a move in the market and could be tempted with a late deal.’ Hold on…

The answer given by Alexandre Pato’s agent when asked by UOL Esporte as to the identity of the clubs interested in his transfer. We were under the impression Pato was already a Chelsea striker, what with ESPN Brazil reporting that the Blues had agreed a £9million with the Corinthian striker on Wednesday. Pato was even reported to have agreed a three-year deal by many outlets. What happened?

Pato’s agent Gilmar Veloz says the aforementioned four clubs ‘have a chance’ of signing the 26-year-old. That may come as news to Jurgen Klopp and Guus Hiddink.

Klopp, on January 12: “My private advice to you is don’t follow the Pato path any longer.”

MATIC LEAVING CHELSEA
Chelsea are selling all of their players. That’s the only conclusion we can draw from this transfer window. Well, they aren’t selling them, they’re ‘losing them’. After Rob Beasley’s claim that the Blues are ‘fearing an exodus‘ of stars including Eden Hazard, Oscar, Diego Costa and Thibaut Courtois, the Daily Mail have yet more bad – or good – news.

Nemanja Matic is now considering his future at Stamford Bridge. That’s the claim from Simon Jones, who says the midfielder ‘is considering whether a change of club is what his career needs’. Retirement is probably the only thing a career involving being replaced by John Obi Mikel needs. Not really, John Obi. Love you, mate.

HAZARD WARNING
That headline is so hilarious I’m intent on using it in every gossip until the end of time.

The latest Eden Hazard update is that Manchester City are interested. Manchester United, Paris Saint-Germain and Real Madrid have all been credited with an interest in the Chelsea winger in recent times, but the Daily Express claim to have the inside track.

‘City have also been monitoring the 25-year-old and have identified him as a potential target should Pep Guardiola replace Manuel Pellegrini at the end of the season,’ claims Charles Perrin. Hazard will cost £61.5million, according to reports from French outlet Buzzsport. They sound eminently reliable.

Buzzsport add that Riyad Mahrez has been lined up to replace Hazard when the Belgian leaves. Delightful.

Why do clubs do this?

AND THE REST
Zenit St Petersburg want Man City manager Manuel Pellegrini to take charge when Andre Villas-Boas leaves at the end of the season…Stoke have made a £19million bid to sign Porto midfielder Giannelli Imbula…West Ham boss Slaven Bilic hopes to get Emmanuel Emenike at West Ham…Norwich want to sign Chelsea striker Patrick Bamford…Liverpool want £3million for teenage striker Jerome Sinclair. Bournemouth and Watford have made enquiries…Dusan Tadic’s transfer to Southampton is being probed by independent investigators from his old club Twente…Middlesbrough want to sign Ross McCormack and Matt Phillips for a combined £16m…Liverpool are continuing talks with Shakhtar Donetsk over the £24m signing of Alex Teixeira and have played down his hamstring injury…West Ham striker Mauro Zarate has joined Fiorentina…Alan Pardew is pondering giving Wolfsburg’s Nicklas Bendtner a chance to return to the Premier League…Crystal Palace are considering offering a six-month contract to striker Emmanuel Adebayor, 31, who is a free agent after being released by Tottenham…Sunderland manager Sam Allardyce has revealed he is looking for two outfield players and a goalkeeper, but refused to confirm whether he wants to sign Swansea striker Andre Ayew, 26…Newcastle head coach Steve McClaren has made a £7m bid for Swansea striker Bafetimbi Gomis, 30…However, Newcastle look likely to end their interest in Andros Townsend after Tottenham refused to lower their £14m valuation of the 24-year-old England winger.