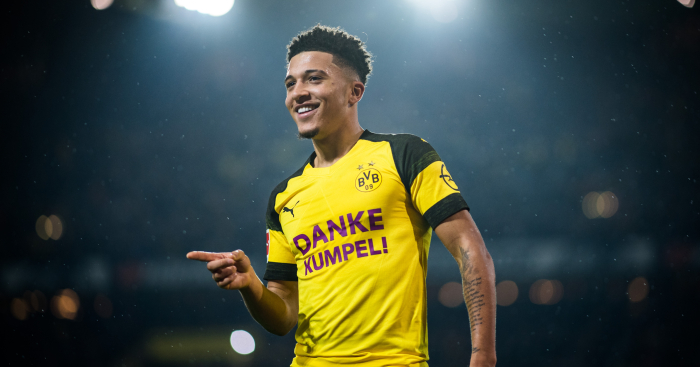 UNITED FRONT
Are you ready for a Jadon Sancho-themed gossip? Let’s hope so, because he is pretty much the sole subject of transfer speculation on Thursday morning.

We start with the Daily Mirror, who say Borussia Dortmund will want around £100m from Manchester United if they wish to sign the winger. The Premier League side ‘are now watching developments closely’ and are ‘ready to back Ole Gunnar Solskjaer in the transfer market when he is eventually confirmed as full-time manager’.

How will Dortmund replace Sancho? By signing a young, exciting English winger, of course. And Callum Hudson-Odoi is in their sights, much to the probable chagrin of Chelsea. The Blues are ‘braced for some big-money bids this summer’, and want much more than the £40m Bayern Munich offered for the RB Leipzig target.

HUDSON DITHER
The Daily Telegraph corroborate claims that Dortmund will target Hudson-Odoi if his future international teammate Sancho returns to England. Even with Bayern ‘planning to make another offer at the end of the season’ for the Chelsea forward, Dortmund are confident they can steal a march on their Bundesliga rivals.

They believe they can use Sancho ‘as proof of the opportunities they give to youngsters’. Considering the pair are friends – and Sancho offered advice to Hudson-Odoi over his future recently – it just might work.

But Bayern ‘are still in pole position’ for the 18-year-old, whose Chelsea contract expires in 2020. Might the fact that Christian Pulisic is moving to Stamford Bridge give Dortmund a slight advantage in negotiations?

PUT YOUR CLAUSE AWAY
For what it’s worth, United ‘believe they can convince’ Dortmund to part with Sancho this summer. The London Evening Standard say the winger is one of their ‘top targets’, with a source adding: “They are doing everything they can to sign him.”

The Mirror might think it will take nine figures, but the Evening Standard say ‘a bid in excess of £80m is expected to be enough to lure him to Old Trafford’, with PSG also monitoring the situation.

One advantage Ed Woodward and his pals have is that City are not only ‘highly unlikely’ to try and re-sign Sancho, but their bitter rivals did not include an anti-United clause when they sold him to Dortmund in 2017. They did precisely that Brahim Diaz joined Real Madrid in January, his £22m move including a 15% sell-on clause that would increase to 40% if he was sold to United. It seems they learned from their mistakes.

AND THE REST
Manchester City are front runners to sign Atletico Madrid’s Spanish midfielder Saul Niguez, 24, this summer… Barcelona are ready to listen to offers for Philippe Coutinho, 26, with a move to Ligue 1 champions Paris St-Germain most likely… Barcelona have cooled their interest in Atletico Madrid and France forward Antoine Griezmann amid speculation Manchester United will push to sign the 27-year-old… Lazio are close to a pre-contract agreement with 26-year-old Spanish full-back Alberto Moreno who will leave Liverpool this summer after five seasons at Anfield… Barcelona are preparing a £43m bid for Serbia striker Luka Jovic and hope to start negotiations with Eintracht Frankfurt for the 21-year-old in the next few weeks.