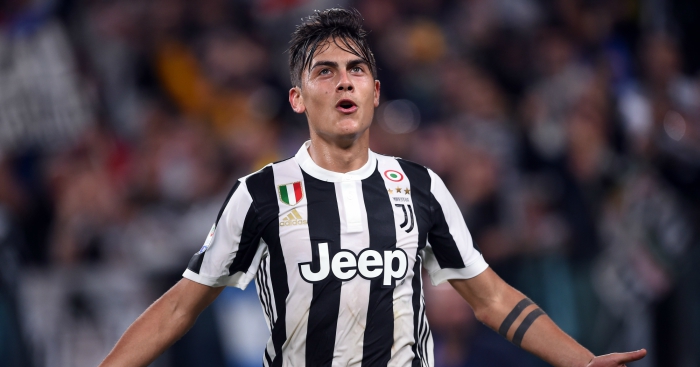 MAN UNITED TO MAKE SERIE A TRIPLE SWOOP
The news of Cristiano Ronaldo joining Juventus, with Manchester United reportedly turning down the chance to sign him, has sent rumours into overdrive about where United will instead spend their summer transfer budget. Oh yes – prepare for a triple swoop.

Next, Corriere dello Sport say that United are prepared to go up against Paris Saint-Germain to try and sign both Leonardo Bonucci and Alessandro Romagnoli from Milan. Which definitely isn’t a tactic from Milan to try and spark a bidding war for two players when they’re in need of raising funds.

Honestly, Jose Mourinho could soon pick a whole team of defenders. Rojo in goal, Jones and Smalling centre-backs. Dalot and Shaw left-backs. Bailly and Bonucci in central midfield. Valencia and Young on the wings. Lindelof and Romagnoli up front. Daley Blind, Matteo Darmian and Timothy Fosu-Mensah are on the bench.

LIVERPOOL TO OFFER FOR DYBALA…
One of the inevitable results of Ronaldo joining Juventus is that the Italian champions will need to sell at least one attacker. The smart money is on Gonzalo Higuain – also expensive, also older than 30 – being sold, but Argentinian outlet TyC Sports have other ideas.

They say that Liverpool are about to make an offer for striker Paulo Dybala. They also reckon that Dybala returned to Argentina after not being named in their World Cup squad, but was not told that Juventus were considering signing Ronaldo. He has therefore not been told what Ronaldo arriving does for his first-team chances.

Whether Liverpool would be the best club for Dybala to join is another question entirely, but with Roberto Firmino crucial to Jurgen Klopp’s plans and Sadio Mane and Mohamed Salah also at Anfield, Dybala could face the same issues. Chelsea need to sell Alvaro Morata and buy him.

…BUT WIJNALDUM COULD LEAVE
More Liverpool news now, and the claim that Georginio Wijnaldum could leave Anfield this summer. Turkish outlet A Spor say that he might be joining Fenerbahce. Given that the Turkish media also said that Jack Wilshere to Fenerbahce was a done deal, we’re not entirely convinced yet.

That said, it wouldn’t be a huge surprise if Wijnaldum left, despite his decent form last season. Jurgen Klopp now has Jordan Henderson, James Milner, Naby Keita, Fabinho, Alex Oxlade-Chamberlain and Adam Lallana, who are all capable of playing in that midfield three. If Henderson, Keita and Fabinho are the likely starters, that leaves an awful lot of talent on the bench.

AND THE REST
Chelsea have opened talks with N’Golo Kante over a proposed new £200,000-a-week contract… Liverpool want Grzegorz Krychowiak, on loan at West Brom last season as they were relegated… Chelsea have agreed a deal to sign defender Daniele Rugani from Juventus for £35m.