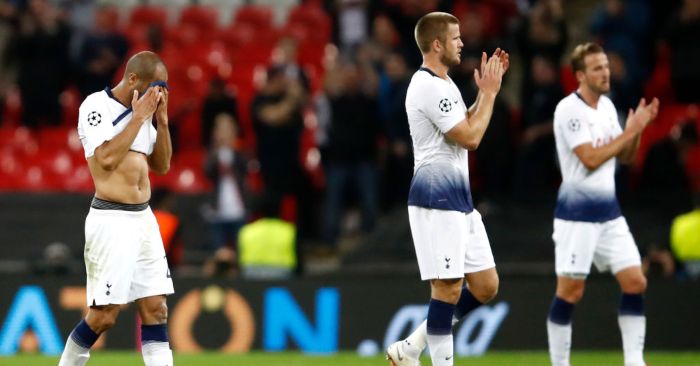 TOTT DOLLAR
The return of a Spursy streak to this Tottenham side could have some far-reaching consequences. Has Mauricio Pochettino taken these players as far as he can? Is it time to bring Juande Ramos back? At what stage do they replace Harry Kane with Roberto Soldado?

It seems that two players have taken their current plight particularly badly. Considering Lucas Moura has started two Premier League games all season, appearing for a combined nine minutes across the last three matches, that might not come as much of a surprise. The Daily Star refer to the Brazilian as ‘unsettled’ and ‘unhappy’ with his inability to win over Pochettino a ‘serious cause for concern’.

Moura ‘will be increasingly keen to quit’ if his chances of playing regularly do not improve. And with Ole Gunnar Solskjaer ‘a huge admirer of the versatile South American,’ a potential exit route has already emerged.

The Manchester United manager has made the right noises concerning Mason Greenwood’s development, suggesting he is Romelu Lukaku and Alexis Sanchez’s replacement. But Moura is seen as ‘the best solution to the problem’.

And while United are busy trying to persuade Tottenham to part with a player they value at around £50m, they might pursue one of their former targets.

The Star also say Eric Dier ‘is being monitored’ by those in charge at Old Trafford. His position is even more, well, dire, having been on the bench in six out of seven games this season without playing a single minute.

No potential fee or value is mentioned, but the Star mention ‘a cut-price swoop’ as they are ‘in the market for a holding midfielder’.

BRAUT FORCE
As predictable as it was to see Erling Braut Haaland linked with Manchester United after his midweek exploits, things have gone a little too far. Links to Barcelona? Come on now. Rumours concerning Cristiano Ronaldo’s Juventus? Seriously…

The latter update is, according to the Daily Mirror, a result of ‘reports in Italy’. Manchester City are also thrown into the equation, but there is no link to the initial story. Weird.

After a bit of a search, the trail of breadcrumbs leads us to a quaint little website called TuttoJuve.com. And they, while making absolutely no mention of the Premier League champions whatsoever, bring ‘confirmation of Juventus’ interest’.

In total, there are 43 words. And a whole lot of conjecture and supposition.

AND THE REST
Crystal Palace, Leicester City and Middlesbrough are among the clubs interested in Wolves centre-back Cameron John, 20, who is on loan at Doncaster Rovers… Aston Vila are set to compete with Leeds United for the signature of Coventry City defender Sam McCallum, 19.