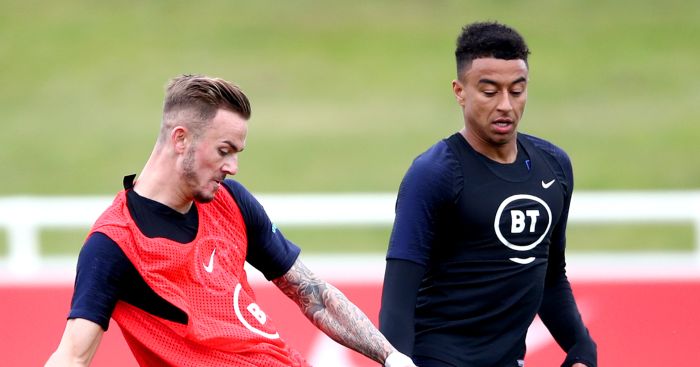 SILLY SWAP
How much would you value Jesse Lingard at? He is 27, has a career tally of 17 Premier League goals and has not scored or assisted in the top flight since Boxing Day.

To Manchester United, he might be worth at least £15m. It would represent a fair price for what they have put into his development, and market trends suggest that sum for an England international at what ought to be his peak could even be a little low.

But to Leicester, for whom Lingard actually briefly played in his formative years, an offer of £45m plus him in part-exchange makes approximately no sense.

That is the deal mooted by the football fan news in the Daily Mirror, who say United ‘are prepared to trade’ Lingard and £45m to land James Maddison. And of course they are. Leicester won’t be, mind.

We are told that Ole Gunnar Solskjaer is ‘desperate’ to sign Maddison and will ‘sacrifice’ Lingard to land him. The kicker here is that they value Lingard at £40m. And he would absolutely not be worth that to Leicester – Maddison is on less than half his wages, for a start.

Even United accept that prising Maddison from Leicester in January will be ‘impossible’. So they will set out their stall in the summer. Expect Leicester to demand £85m from the start and not budge, with United paying that in the final week of the window and pretending they’ve just conducted a negotiating masterclass.

SILLY SWAP – PART THE SECOND
The Mirror also claim that Paul Pogba could be off to Inter Milan. That will only happen, according to United, if they get Lautaro Martinez in return.

Pogba’s willingness to work again with Antonio Conte has led to Inter ‘accelerating their interest’ in the Frenchman, whose situation is also being monitored by Juventus and Real Madrid.

And United, despite Solskjaer’s public claims to the contrary, have come to accept that his departure might be for the best. They ‘are in a strong bargaining position’ to try and include striker target Martinez in any deal.

In another example of a convoluted player part-exchange that just won’t happen, Inter value Martinez at around £80m, with United suggesting Pogba is worth £150m. So, to conclude, the Mirror say United are signing Martinez and Maddison for Pogba, Lingard and £25m.

INTER THE UNKNOWN
Inter will be busy this winter, lining up a £20m move for Christian Eriksen.

The Sun on Sunday say that while the Tottenham midfielder will be free upon the expiration of his contract at the end of the season, Inter fear losing out in a summer auction.

Their solution will be to pay ‘a cut-price fee’ now rather than ‘risk losing out’ later. He sure will look great next to Pogba in midfield.

AND THE REST
West Ham United will attempt to challenge Manchester City for Napoli’s Senegal defender Kalidou Koulibaly, 28… The Hammers have scheduled a meeting with Benfica next week over the loan signing of Portugal midfielder Gedson Fernandes, 20… Juventus have made contact with the representatives of Chelsea’s Brazilian left-sided defender Emerson, 25… Everton boss Carlo Ancelotti wants to bring Real Madrid’s Colombia playmaker James Rodriguez, 28, to Goodison Park on loan… Tottenham are hoping to make permanent the loan of Argentina midfielder Giovani lo Celso, 23, from Real Betis in a £27m deal in the January transfer window… Crystal Palace have targeted a loan deal for Everton and Turkey striker Cenk Tosun, 28… Arsenal and Germany defender Shkodran Mustafi, 27, could leave the Premier League club at the end of the month… Leicester manager Brendan Rodgers would not confirm or deny reports of a move for Juventus and Turkey defender Merih Demiral, 21.