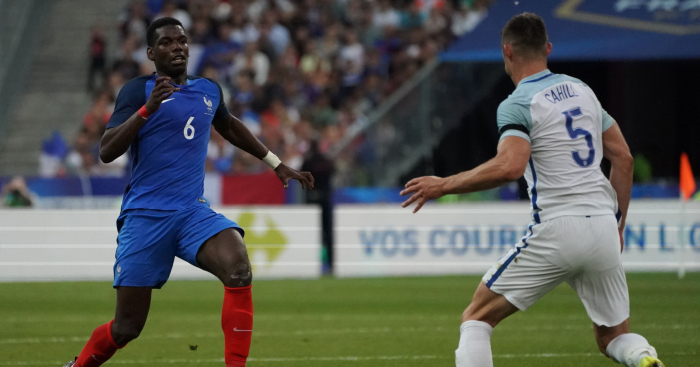 POG OFF
Manchester United signed Paul Pogba for £89.3million in summer 2016. Since then, he has won two trophies at club level, scored 19 goals in 95 games, and has had numerous high-profile disputes with manager Jose Mourinho. The latest – and surely most damaging of the lot – came on Tuesday evening, and seems to signal the beginning of the end.

So quite how United can subsequently turn around and ‘demand more than £200m’ to sell the midfielder is beyond you, I or any other sane being. Anyone who would suggest that his value has more than doubled in the space of two-and-a-half turbulent years is mistaken.

Still, that is the claim of David McDonnell, who says that United ‘will set a monster fee’ for the Frenchman as he has three years remaining on his contract. Well alright then.

The Daily Mirror journalist adds that Pogba is ‘destined to leave’ Old Trafford, with three clubs interested in signing him. Juventus want him back, while Barcelona and Paris Saint-Germain are sniffing around. They will have to spend an unfathomable world-record fee if they are deadly serious.

YOUNG MAN TO OLD LADY
On the other side of Manchester, Premier League champions City are trying to make some transfer waves of their own. They ‘are interested’ in yer man Paulo Dybala, who does goals for Juventus.

Or he did, anyway. Dybala has failed to score in four Serie A appearances this season, three of them being starts, as he has become a victim of the era of Cristiano Ronaldo. In The Old Lady’s desperation to accommodate their new superstar, some have to be sacrificed.

City may use Dybala’s difficult situation to entice him. But any move would be born from Juventus’ own interest in Leroy Sane, whose representatives have already met with the club. So say Calciomercato, who say ‘the report comes from England’, which is deliciously vague.

The only issue for Sane is that City have informed him a move to Juventus will only be possible if they get Dybala in return. Dream on, probably.

OVER THE CAHILL
In an inevitable piece of transfer speculation, Sheffield Wednesday want to bring Gary Cahill closer to home. The Chelsea centre-half is likely to leave Stamford Bridge in January, with game time increasingly limited under Maurizio Sarri. So a move closer to hometown Dronfield would certainly appeal.

According to The Sun, Wednesday will look into a ‘sentimental’ move, while Aston Villa also wish to continue their fetish for ageing Chelsea defenders. But Cahill ‘believes he can still perform in the top flight’, which is where perhaps the greatest throwaway line in the history of transfer rumours comes into play.

You see, The Sun have just buried the following claim in the midst of their story, and it might be of great interest to penalty master Phil Jones.

‘Manchester United boss Jose Mourinho is a big fan of Cahill and is looking to bolster his options at the heart of his defence.

‘He will monitor the 61-cap England star’s situation ahead of the winter transfer window.’