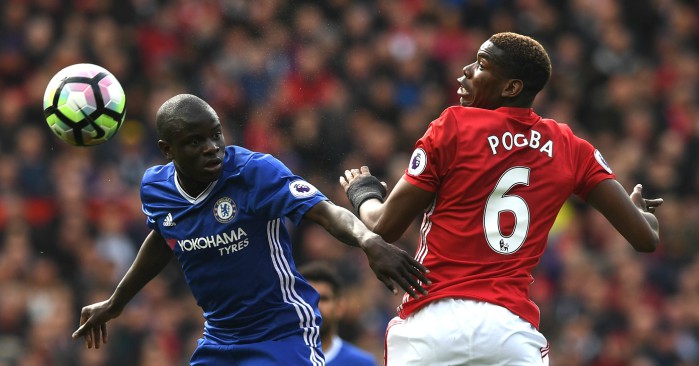 N’GOLO N’GOING?
You know a transfer rumour is surprising when all the usual suspects use both the club and the player involved in the headline. Both the Daily Express and the Daily Star waste no time in telling us that Manchester United want to sign N’Golo Kante.

Hell, the Daily Star go as far as to capitalise two words in their headline – although quite why they need to shout TRANSFER INTEREST is beyond you or I.

The story is simple: United ‘are lacking reliability in midfield’, and thus ‘have sensationally turned to targeting Kante’. Hopefully there is footage of this ‘sensational turn’ somewhere.

So where did this claim initially come from? Funny you should ask: it’s an exclusive from the mighty CaughtOffside. Who knew they had such powerful contacts?

They say United have made Kante ‘one of their top targets’, even adding that ‘initial contacts have been made’. It would be an ‘ambitious and audacious’ move. And it bloody well would, you know.

Paris Saint-Germain and Real Madrid also want the Frenchman, but United’s desperation for an actually competent midfielder could see them push harder.

It was reported in the summer that Chelsea would fend off any potential interest in Kante by making him their highest-paid player, but those contract negotiatons appear to have stalled. His current deal expires in 2021.

There is no doubt United and Jose Mourinho harbour an interest in the midfielder; they’d be silly not to. But it seems highly unlikely they could prise him from Chelsea at this point. They have absolutely no room to bargain with either the player or the club.

LET’S TALK ABOUT CESC
One Chelsea midfielder who is likely to leave soon is Cesc Fabregas. A Calciomercato exclusive claims he is already in talks with AC Milan.

They speculate that the Italian giants could ‘be active in January’ to try and deal with their mounting injury problems. They will target ‘at least’ two to three new players in the January transfer window.

Leandro Paredes of Zenit and Celta’s Stanislav Lobotka are on their radar, but Fabregas ‘could be the easier move to pull off at the moment’. His Chelsea deal runs out at the end of the season, so the lack of a transfer fee is certainly appealing. The only stumbling block is his ‘heavy’ wages, which would need to come down if he is to move to Serie A and prolong his career by about 20 years.

AND THE REST
Galatasaray have made contact with Liverpool over a January loan for Divock Origi… Manchester United are prepared to double the salary of Roma’s 22-year-old Italy midfielder Lorenzo Pellegrini, who has been linked with a £26m move to Old Trafford… Real Madrid are ready to sign a striker in January after losing faith in Wales international Gareth Bale, 29, and France’s Karim Benzema, 30… Barcelona will look to sign a central defender in January because of concerns over the fitness of France international Samuel Umtiti, 25… Newcastle United owner Mike Ashley has sanctioned funds for the Magpies’ January transfer-window activity.