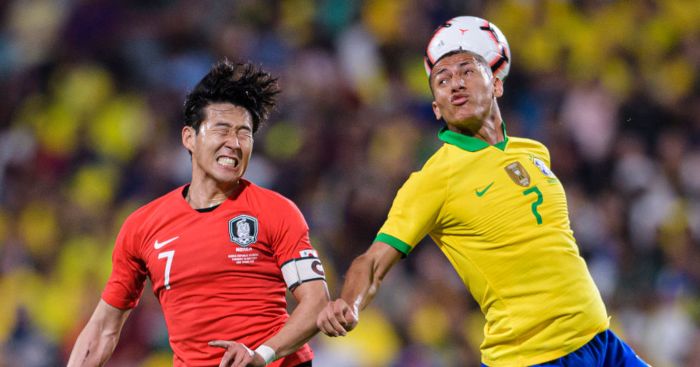 STEAL FROM THE RICH
When not claiming his favourite English food is pasta, Richarlison can more often than not be seen playing anywhere across Everton’s front line. It is such versatility that appears to have caught the eye of Manchester United – it can’t be a goal return of one every four Premier League games.

The London Evening Standard drop in the most casual mention of the Everton forward possible in an article focused on Anthony Martial’s improvement. They say he and Erling Braut Haaland ‘have been watched’, while Timo Werner and Callum Wilson remain potential targets.

And while James Robson spends plenty of time extolling the virtues of Ole Gunnar Solskjaer’s patience with Martial, he claims that the manager ‘has been holding monthly meetings with his recruitment team in a bid to boil down a three-man shortlist’ for a new striker in January.

Haaland ‘is high in his thoughts’ but has many other suitors. And Solskjaer ‘has been promised funds to bolster his attack’, so has been busy whittling down his options.

But it does depend on how far those ‘funds’ will stretch. The Standard mention no possible fee – Richarlison himself is given only a passing mention – so we must go to Football Insider for our fix.

Their exclusive belief is that Everton think the Brazilian’s value ‘has rocketed to £100m’, with a source describing the forward as a “goldmine”. But it’s one that the Toffees ‘have no intention’ of selling. Which is surely because no-one is offering a nine-figure sum for a forward with 16 goals in 47 Premier League games.

TOBY OR NOT TOBY
It wouldn’t be a transfer gossip column without some mention of Jose Mourinho’s Tottenham, not least to continue the desensitisation process with regards to that phrase. It’s still weird.

With reports in Italy suggesting Christian Eriksen is still likely to leave, the Daily Telegraph bring news of Toby Alderweireld’s ‘reinvigoration’ by the new managerial appointment.

The Belgian ‘was ready to see out’ his final months in north London before contract expiration, but Mourinho has changed all that. He intends to ‘rebuild Tottenham’s defence’, but wants Alderweireld at the centre of it rather than ‘pushing him out’.

So Alderweireld ‘is now more open to the prospect of reopening contract negotiations and is no longer discounting the prospect of staying at Spurs past the end of this season.’ It’s just down to Daniel Levy to offer more than an extra £5.

AND THE REST
Crystal Palace want to sign Chelsea striker Olivier Giroud, 33, but the France international’s wage demands could prevent a deal being agreed… Owner Roman Abramovich has ruled out any possibility of selling Chelsea, with friends insisting his love affair with the club has been reignited by Frank Lampard’s revolution… Chelsea are interested in Russia’s CSKA Moscow striker Fedor Chalov, 21, and will buy him in January if the club’s transfer ban is lifted… French striker Karim Benzema, 31, is considering a two-year contract extension offer from Real Madrid.