Everton have had a pretty good season of forward steps, so will definitely sell their three best players. 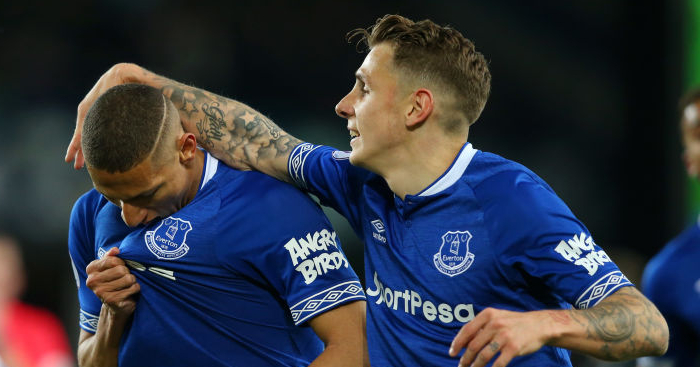 I FEEL PRETTY, AND WITTY, AND GUEYE
With Ander Herrera having said his emotional goodbyes to Manchester United this weekend, plans are afoot to replace him at Old Trafford. Idrissa Gueye is understood to be top of that particular list.

The Daily Mail say the midfielder will ‘play his final game’ for Everton on Sunday, with both United and PSG interested in him. While the latter would appeal to a French speaker who fancies winning 427 league titles before he retires, the former can offer more money to both Gueye and Everton in the absence of trophies.

United feel that Gueye ‘could be the player to unlock the best’ of Paul Pogba, making him yet another expensive key alongside Nemanja Matic and Fred.

KISS (GOODBYE) FROM A ROSE
If Everton fancy it, they could offload two of their best players in the same window. Tottenham want Lucas Digne as Mauricio Pochettino seeks ‘to freshen up the full-back roles next season’.

The Daily Star say Everton would only consider a potential deal if Danny Rose joins in part-exchange, with the Toffees receiving a small fee on top – and the sports betting apps may even start to offer odds on this as things progress.

The two clubs will also continue to compete for midfielder Andre Gomes, who spent the season on loan at Goodison Park from Barcelona. Marco Silva confirmed that negotiations have begun with regards to keeping him permanently, but Tottenham have a spanner and are prepared to throw it into the works.

STEAL FROM THE RICH
And hell, if they are feeling particularly masochistic and self-destructive, Everton might contemplate letting all three of their best and most important players leave in a summer they also stand to lose Kurt Zouma and gain Sandro Ramirez from their respective loans. That’s a fair trade-off.

A Daily Mirror exclusive suggests that the club ‘fear’ that they will be unable to keep Richarlison from the clutches of PSG and Atletico Madrid. Both continental clubs are interested in the £70m forward and can offer European football with greater chances of international recognition for Brazil.

Richarlison is ‘happy and settled’ on Merseyside, but could both improve his current £125,000-a-week wages and his chances of silverware.

But Everton ‘are not interested in selling their star asset’. And that pretty much stands for Digne too. Gueye will probably be allowed to leave – he turns 30 in September and wanted to go recently – but Silva is unlikely to want to undo his good work completely.

AND THE REST
Pep Guardiola has assured Manchester City he has no plans to quit as manager of the club for at least two years amid fears he could be tempted by a move to Juventus this summer… Bayern Munich are still interested in Chelsea’s England international winger Callum Hudson-Odoi, 18… Mesut Ozil, 30, will not leave Arsenal this summer and the German will stay at the Gunners until the end of his contract… Ligue 1 side Nice are interested in signing Chelsea striker Olivier Giroud, 32, in the summer, according to technical director Gilles Grimandi… Tottenham are considering a move for £35m-rated Portugal international and Benfica midfielder Gedson Fernandes, 20… Leicester’s Belgian midfielder Youri Tielemans, 22, expects to return to Monaco this summer when his loan move at the Foxes ends.