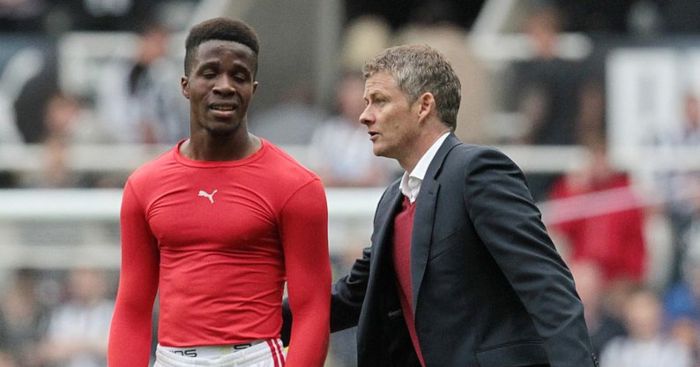 DOES OLE GUNNAR SOLSKJAER HAVE A DAUGHTER?
They say you should never go back to an ex. The relationship failed in the first place for a reason, and only a fool would think they have changed enough to stop leaving their socks all over the f***ing house like the absolute reprobate they are.

Wilfried Zaha should perhaps keep that in mind when he discovers that Manchester United want to sign him for ‘£70million-plus’ in the summer. The Sun say Ole Gunnar Solskjaer is ‘leading the race’ to sign the Crystal Palace winger, who played more games in five months on loan with Cardiff than he did in two years at United.

Those Cardiff minutes actually came under Solskjaer, of course, so there is a chance. And United ‘believe an older and wiser’ Zaha would be more suited to them now than he was when he first joined.

The Sun themselves admits ‘it is unclear’ whether Zaha would be open to the move. United retained their 25% sell-on fee for the winger during negotiations to sign Aaron Wan-Bissaka, so that would also be a consideration.

SWAP SHOP
It could happen. The part-exchange mooted by Tuttosport absolutely, irrefutably, irrevocably will not.

The Italian outlet refers to Juventus’s pursuit of Paul Pogba as ‘a complicated but not impossible operation’. But they are ‘willing to give it a try’ after ‘signals of Italian cravings’ emerged once more.

Tuttosport do not make it clear whether all five, just one or a combination thereof would be thrown into any Pogba deal. And why would they? It’s much better to leave it to the imagination rather than clarifying it.

As a 33-year-old Frenchman, the forward is neither young nor English enough to warrant many chances under Frank Lampard. Just 211 minutes in all competitions this season speaks volumes.

So the message to Inter Milan, Vancouver Whitecaps, Nice, Bordeaux, Marseille and Lyon – and any other interested club – is that £5m would do.

AND THE REST
Arsenal’s German goalkeeper Bernd Leno, 27, is on Bayern Munich’s radar as a target to be their next number one… Liverpool manager Jürgen Klopp will not allow Croatia centre-back Dejan Lovren, 30, to leave the club in the January transfer window… Manchester City are set to give Dutchman Giovanni van Bronckhorst the chance to audition as Pep Guardiola’s successor by appointing him coach of their sister club in New York… Everton are open to selling Dutch keeper Maarten Stekelenburg in January, with the 37-year-old’s contract running out at the end of the season… Wolves will complete the signing of PSV Eindhoven’s 17-year-old Dutch defender Nigel Lonwijk for a nominal fee of £200,000 in January.