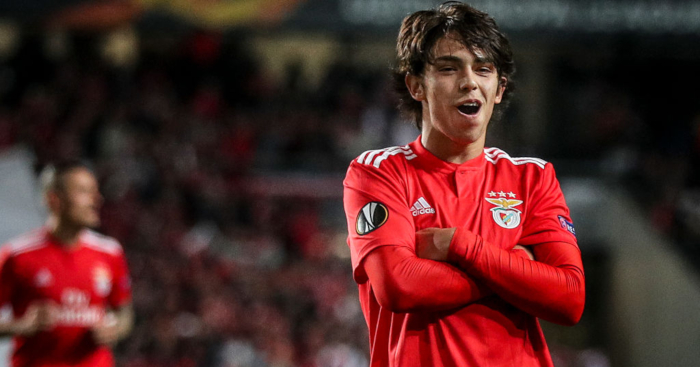 PORTUGEEZERS
Manchester United might be standing still as their rivals push boundaries, but one thing is for certain: their pride has been compromised, and self-important football clubs with a lot of money know only one way to lick their wounds.

The London Evening Standard say Ole Gunnar Solskjaer wants ‘to make a flying start to his summer overhaul,’ and will therefore ‘look to complete’ two particular deals ‘swiftly’. They both rather handily come from the same league and country, which will cut down on travel costs. And they might need that, considering Joao Felix and Bruno Fernandes are likely to set them back a combined £150m.

There is ‘concern’ as to whether either would move to Old Trafford without the prospect of Champions League football. Felix’s Benfica have already qualified for Europe’s premier tournament, while Sporting are almost certainly consigned to another season of Europa League football despite Fernandes’ best goalscoring efforts. Of course, if either chose to leave then they would attract Champions League suitors.

City and Real Madrid, for example, want Felix. He would cost £100m, breaking Paul Pogba’s current British transfer record. And with Solskjaer ‘desperate to add creativity and goals to his side,’ a 19-year-old with 18 (and 11 assists) in 40 appearances this season would appeal. As would fellow City target Fernandes, who has scored 28 goals and assisted 16 in 48 games in 2018/19.

United ‘have shown the greatest interest‘ of any club in the 24-year-old, with Solskjaer wanting two of his five summer signings to be midfielders. To that end, second-best Premier League midfielder of the season Idrissa Gueye is another target.

EARN YOUR SPURS
On that note, the Daily Telegraph inform us that Tottenham will ask Mauricio Pochettino to ‘work miracles’ again this summer, with ‘a number of their Premier League rivals preparing to outspend them’.

They add that Tottenham’s overall spend ‘could easily push towards the £100m mark,’ with £30m put aside for Andre Gomes and Nice right-back Youcef Atal, who would cost ‘at least £34m’, targeted.

The suggestion is that they will not ‘make more than two or three significant signings,’ with one of them expected to be an English player to boost their homegrown quota. Welcome Jack Grealish/Ryan Sessegnon.

CHRISTIAN BELIEF
And goodbye Christian Eriksen. Spanish newspaper AS report that ‘a verbal agreement has been reached’ between the player and Real Madrid, while the Daily Mirror say Daniel Levy ‘is expected to demand a fee of up to €150m’ for the Dane, which really does cover all bases quite beautifully.

That is a fair bit of money, of course. So The Sun believe Real ‘are willing to play the waiting game,’ and will put off signing him this summer to swoop in 2020 when his contract expires.

‘Real’s plan is to pile the pressure on Tottenham with a late bid in August,’ they say. But they will happily bide their time until the end of next season to bring in Luka Modric’s successor.

AND THE REST
Arsenal and Germany midfielder Mesut Ozil, 30, insists he is happy at the club and wants to stay at the Emirates next season… Chelsea’s Belgium Under-21 midfielder Charly Musonda, 22, is hopeful of a return on loan to Dutch side Vitesse next season… Manchester United are ready to give 21-year-old England U21 defender Axel Tuanzebe, who is on loan at Aston Villa, a chance to prove he can break into the first team at Old Trafford… Manchester City’s France left-back Benjamin Mendy, 24, will be given the chance to prove himself next season after featuring only 10 times in the Premier League this term – if he can stay injury free… Brazilian defender Filipe Luis, 33, may still decide to stay at Atletico Madridand turn down a move to Paris St-Germain.