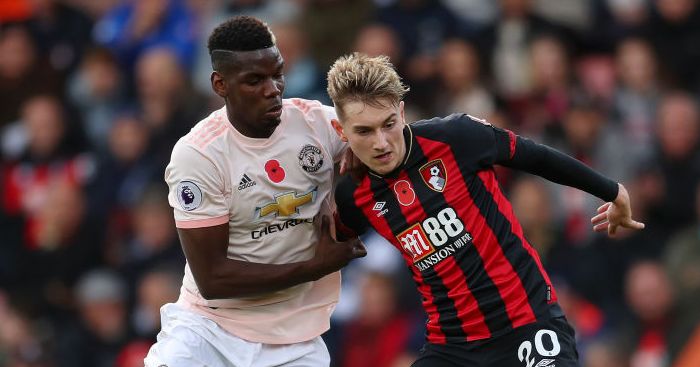 THE CHOSEN WAN
How wonderful it is to hear from old friends just as they started to slip from your consciousness. Duncan f***ing Castles is back, baby.

And with a bang, too. He has ‘a source familiar with the negotiations’ of Manchester United’s move for Aaron Wan-Bissaka, and is happy to report that they ‘have agreed a fee’ with Crystal Palace. So that’s what they’ve been doing.

It is what Castles describes as ‘a world-record sum for a specialist full back’. After an opening offer of £25m, United will part with more than double that: £55m.

But his claims in the Daily Record are disputed by the Daily Mail, who insist that United ‘have not reached an agreement’ with Palace and ‘the two clubs are still locked in talks’ over money. Anyone requesting odds on the move so they can use a Paddy Power promo code will be frustrated.

Sorry, but who are we believing here: one of the most well-sourced national newspapers in the country, or Duncan Castles?

What a bloody man.

BROOKS EYED
From one young, promising, British Premier League player whose club have no desire nor need to sell them to another. United’s next target, according to The Sun, will be David Brooks.

Mike McGrath and Tom Barclay team to tell us that Bournemouth ‘would demand at least £50m to even consider a deal’ for the Wales international, who ‘is a boyhood United fan’. The 21-year-old signed a new contract in March that runs for another three years, putting Bournemouth in complete control of the situation.

The boy is good: one of the best signings of this past season, in fact. But is Ole Gunnar Solskjaer really so obsessed with United’s history that his first two signings as manager will be exciting Welsh attackers?

LUK WHO’S OFF
The Brooks revelation is actually an aside to the wider story: that Romelu Lukaku is headed to Inter Milan on a £180,000-a-week contract. That’s less than he’s earning at Old Trafford now, Martin Samuel.

Lukaku ‘has struck a deal’ with Antonio Conte-led Inter, ‘which will come into effect when a fee is agreed between the clubs’. It is thought that United would hold out for the £75m they parted with two years ago. Because they cannot possibly sell a player for profit.

The deal is far from certain. Inter still have to offload Mauro Icardi before bringing Lukaku in. Antoine Griezmann’s move to Barcelona will start a chain of events that includes Paulo Dybala replacing him at Atletico Madrid and Icardi then moving to Juventus before Lukaku can head to the San Siro.

But it does seem likely. Perhaps he will finally be appreciated in Italy.

AND THE REST
Chelsea hope to appoint Derby boss Frank Lampard as their new manager on a three-year deal by the end of the week… Paris St-Germain forward Neymar has been looking at houses in Barcelona, fuelling rumours the 27-year-old Brazil international is set to return to the Nou Camp… Real Madrid have made a £115m offer for PSG’s Neymar and would add either Wales forward Gareth Bale, 29, or Colombia playmaker James Rodriguez, 27, to any deal… Bayern Munich are set to rival Manchester City in the race to sign 22-year-old Spain midfielder Rodri from Atletico Madrid… Jorginho is ready to quit Chelsea and follow Maurizio Sarri to Juventus just a year after the 27-year-old Brazil midfielder joined from Napoli for £50m… Inter Milan and Atletico Madrid are interested in signing Southampton’s 29-year-old England full-back Ryan Bertrand… West Ham have told Manchester United and Manchester City that they have no intention of selling England international midfielder Declan Rice, 20, this summer… Arsenal have made Celtic’s 22-year-old Scotland full-back Kieran Tierney a top transfer target this summer… The Gunners could make an offer for Saint-Etienne’s French defender William Saliba, 18, by the end of the week… Burnley keeper Tom Heaton has rejected the offer of a new deal with the club and the England international could leave on a free when his contract expires next summer.

Newcastle United midfielder Mohamed Diame, 32, is expected to join Al-Gharafa in Qatar when the former Senegal international’s deal with the Tyneside club expires at the end of June… Sporting Lisbon are in talks with Liverpool over a deal to sign 19-year-old Portuguese winger Rafael Camacho… Arsenal are preparing a bid for Red Bull Salzburg’s 18-year-old Hungary winger Dominik Szoboszlai… Juventus are confident of beating Real Madrid to the signing of Manchester United’s France midfielder Paul Pogba, 26… Alternatively, Pogba fears he could be priced out of a move to Real Madrid by Manchester United’s £160m valuation of the midfielder… Leicester’s England defender Harry Maguire, 26, has yet to make a decision about his future amid interest from Manchester United and Manchester City… Napoli have agreed a £4m deal to sign Arsenal’s Colombia goalkeeper David Ospina, 30… England Under-21 goalkeeper Dean Henderson will sign a new contract at Manchester United before rejoining Sheffield United on a season-long loan. The 22-year-old was part of the Blades side that earned promotion to the Premier League last season… Sheffield United, Aston Villa and West Brom are all interested in signing Blackburn forward Bradley Dack… West Brom are in talks with Arsenal over a deal to sign English defender Carl Jenkinson. Scottish champions Celtic are also interested in the 27-year-old.