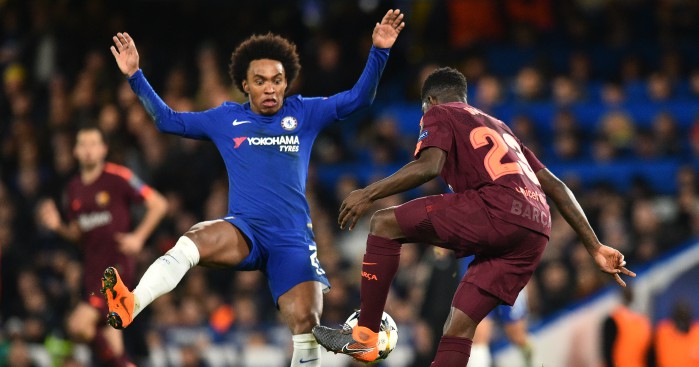 MAN UNITED TO SPEND, SPEND, SPEND
Of course, the natural reaction to losing embarrassingly (they f***ed it) in the last 16 of the Champions League to the fifth-best team in Spain is to spend even more money. The Independent told us on Wednesday afternoon that Jose Mourinho wants four more ‘key players’ and cited a centre-half to partner Eric Bailly (Toby Alderweireld and Samuel Umtiti were the names mentioned) and a controlling midfielder. There was even talk of a swap deal involving Paul Pogba and Marco Verratti.

Now The Sun online has added the name of Willian to that list of names. They claim United ‘tried to snap-up the 29-year-old last summer, but were told there was no chance of him leaving’ at the same time as Nemanja Matic. The fun part of this story? The Sun are suggesting Chelsea would ask for ‘up to £60m’ for a player who will be 30 by the time next season begins.

The Mail say that ‘senior figures inside Old Trafford are questioning whether Jose Mourinho is the right man to lead Manchester United in the wake of Tuesday’s humbling Champions League defeat by Sevilla’. It seems that Ed Woodward is convinced but some of the other board members are wondering why they have to watch all this sh*t football.

DE GEA OUT OF UNITED?
This one keeps rearing its ugly head but there does seem to be some gathering weight behind the notion that David De Gea would quite like to win some more trophies and earn some more money, thank you. He has been at Manchester United for seven years, has probably been their most consistent player, has become one of the best goalkeepers in the world, and yet has won only one Premier League title and only been in the Champions League quarter-finals under David Moyes.

The Independent claimed on Tuesday afternoon that ‘the goalkeeper’s camp are conscious of the contracts signed by Pogba and Alexis Sanchez, and that his importance should put him in line with them’, while Spanish newspaper Marca said that ‘United’s sporting reality clashes with De Gea’s ambition’. It really should. Real Madrid await. Again.

BAYERN COMING IN FOR CAN
‘Bayern Munich are ready to join Juventus in the chase for Liverpool’s Emre Can,’ says the Daily Mirror. We have known for some time that Juventus are interested in the German midfielder, but Bayern would provide a special kind of lure. Can came through the ranks at Bayern but ultimately only made a handful of senior appearances because his way was blocked by stellar names like Bastian Schweinsteiger, Luiz Gustavo and Javi Martínez.

Now things at Bayern are different and with question marks over the future of Chilean midfielder Arturo Vidal, Emre Can could be heading back to Germany.

AND THE REST
Chelsea are keen to sign Juventus’ 29-year-old Ghana full-back Kwadwo Asamoah on a free transfer when his contract runs out in the summer…Vitesse Arnhem want to keep Chelsea’s 19-year-old English midfielder Mason Mount for another season (we told you)…Liverpool’s 17-year-old forward Rhian Brewster will be promoted into the first-team squad when he returns from injury for the start of next season.