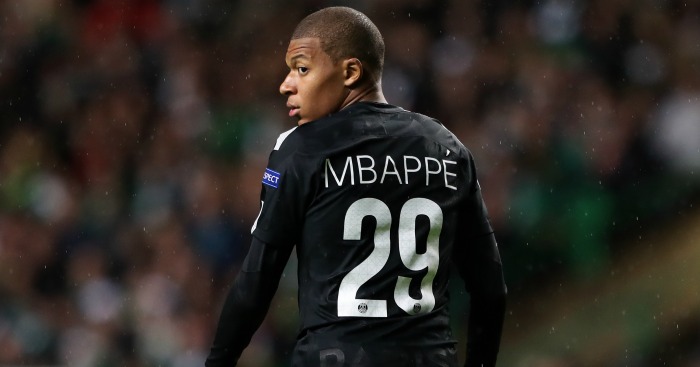 IN FOR THE KYL
The future of World Cup goalscorer Kylian Mbappe seems pretty certain for the time being. His loan move to Paris Saint-Germain from Monaco will be made permanent this summer after the Parisiens activated an automatic purchase option by narrowly avoiding relegation. As the second-most expensive footballer ever, he is surely staying for some time.

Not if you listen to the Sunday Mirror. And we do so so you don’t have to. They use the age-old trope of looming FFP regulations to say that a number of clubs are ‘monitoring the potential consequences’ of ‘huge fines’ and a Champions League ban.

In that instance, PSG will avoid stern punishment if they sell players to make up any deficit, and Mbappe is interesting a number of clubs. Manchester United, Manchester City and Real Madrid are all linked.

PSG will spend £166million to bring Mbappe in permanently, so will look to recoup that fee. And exactly that fee, according to the Mirror: United will offer Anthony Martial, who they value at £80m, in part-exchange, meaning an actual cash sum of £86m on top. Sure.

THE CHEEK OF IT
Sticking with the Mirror and Richardson, who bring news of an another inherently talented starlet. Ruben Loftus-Cheek will make his full World Cup debut against Panama on Sunday, and Marco Silva will be keeping a keen eye on proceedings.

Loftus-Cheek is one of two players Everton feel can ‘help transform’ them into a top-six challenger once more. And it is thought that Chelsea will make the midfielder available for loan yet again next season.

Everton lead that race, but Newcastle and Crystal Palace, where he spent a successful period this season, are also in the queue.

Silva ‘would like to pair’ Loftus-Cheek with fellow England international Jack Wilshere, who is leaving Arsenal this summer. That is a tasty midfield, and a slight improvement on Wayne Rooney and Davy Klaassen.

NO WAY, JOSE
And the Sunday Mirror complete a hat-trick with news of Manchester United’s perennial search for a left-back.

Jose Luis Gaya is their new target for the position after ‘being priced out’ of a move for Juventus man Alex Sandro. PSG now want the £50m-rated Brazilian, leaving United to go for Gaya instead.

Valencia would want closer to £30m for a player who signed a new contract only last month. Jose Mourinho knows Ashley Young ‘has a limited number of years in the tank’, while there are still ‘doubts’ over Luke Shaw. That’s an understatement.

AND THE REST
Manchester City have a verbal agreement in place to sign 26-year-old Napoli and Italy midfielder Jorginho, according to the player’s agent… Spanish playmaker Marco Asensio is concerned over his Real Madrid future and Liverpool keen to sign the 22-year-old… Newcastle United are in no hurry to let Serbia striker Aleksandar Mitrovic leave St James’ Park, with club bosses hopeful of getting maximum value for the 23-year-old if manager Rafael Benitez still wants to sell… Lyon president Jean-Michel Aulas has not ruled out reopening talks with Liverpool over France playmaker Nabil Fekir, 24, but says negotiations have ended for now… Juventus are considering moves for Atletico Madrid’s Uruguay defender Diego Godin, 32, and Ajax’s 18-year-old Netherlands centre-back Matthijs de Ligt as they look to find a replacement for 23-year-old Italian Daniele Rugani, who is a target for Chelsea.

Juventus have also joined the race for 26-year-old Jack Wilshere – who is leaving Emirates Stadium when his contract expires this summer – with Crystal Palace, West Ham and Wolves also interested… Inter Milan have made a bid to sign winger Malcom on loan from Bordeaux with an option to buy the 21-year-old Brazilian for a deal worth £35.2m… Villa have received no formal bids for 22-year-old English midfielder Jack Grealish, who has been linked with Liverpool and Tottenham… Croatian midfielder Mateo Kovacic, 24, wants to leave Real Madrid and could attract interest from Premier League clubs… Liverpool are ready to join Barcelona in the race for PSV Eindhoven winger Hirving Lozano with the 22-year-old Mexico international’s future set to be decided after the World Cup… West Ham are reportedly waiting on an answer from Lazio in order to confirm the signing of 25-year-old Brazilian winger Felipe Anderson.