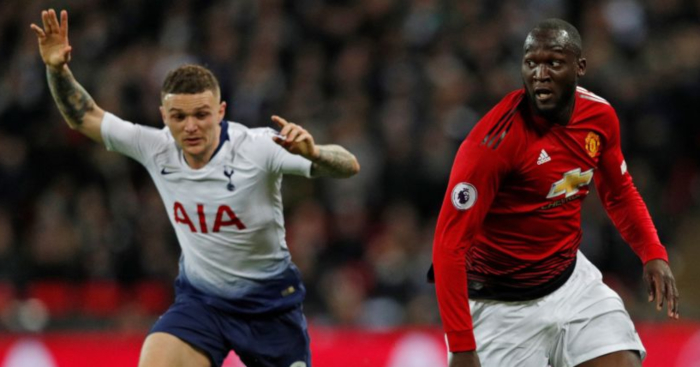 CD ROM
It seemed that Romelu Lukaku had a future at Manchester United under Ole Gunnar Solskjaer. The Belgian scored in each of his first three appearances since he replaced Jose Mourinho as manager, then ended a spell on nine games without a goal by scoring six against Crystal Palace, Southampton and PSG in February and March.

But Solskjaer is apparently dissatisfied with having a £75m striker who only scores in short bursts of three straight games before becoming completely and utterly ineffective for long periods. So United have agreed to ‘listen to offers’ for him.

Lukaku himself talked up a move to Italy in October, with his agent backing up those claims and adding that he is “someone who loves to know a different culture, a different football”.

The Daily Telegraph pretty much take that ball and run with it, linking Inter Milan, Bayern Munich and PSG with a player who ‘wants to be a regular starter’.

United ‘would at least want to recoup their outlay’ on Lukaku, whose £255,000 wages could also be a problem. But the silver lining for the 25-year-old is that the unemployed Antonio Conte, linked with Inter, Juventus and Roma, ‘would be interested in signing Lukaku’ wherever he is appointed. And they share an agent…

YOU GOT THEM HIPS LIKE SHAKIRA, SMILE LIKE CAMILA, GOT ME FEELING LATINO
Manchester City’s Champions League defeat to Tottenham really has hit hard. They remain on course for a quite ridiculous Premier League points total and a possible haul of three – sorry Pep, four – trophies this season, but some components of this winning machine want out.

Spanish media outlet El Chiringuito claimed earlier this week that up to eight players will request to leave this summer, which seems excessive. They named Leroy Sane and Gabriel Jesus as two who are unhappy with their lack of game time.

Sky Sport Italia throw in a third name, with professional handyman Danilo apparently edging towards Inter. The two clubs are already holding discussions, with City dropping their initial demand of a £25.9m fee closer to a more reasonable £19m. How will they cope without him?

ENJOY YOUR TRIPP
The most batsh*t news of the day sees Kieran Trippier being linked with a move to Serie A. Because a more defensive league is definitely what he needs right now.

The infamous Gianluca Di Marzio says Napoli ‘are determined to improve Carlo Ancelotti’s options on the wing,’ which is fine as long as they don’t play him at right-back. But Tottenham will not entertain any offers until the end of the season as they wish to maintain their focus on an unlikely Champions League tilt. Selfish sods.

At the bottom of the story is the following line, the most devastating passing comment in history:

‘In addition to Napoli, there’s also interest from Manchester United for Trippier.’

AND THE REST
French midfielder Paul Pogba, 26, and Spanish goalkeeper David de Gea, 28, are using the uncertainty over whether Manchester United will qualify for next season’s Champions League to demand huge pay rises to stay at Old Trafford… Arsenal target Nicolas Tagliafico, 26, has rejected the offer of a new deal at Ajax but his representative, Ricardo Schlieper, has hinted that the Argentine defender favours a move to Italy… Real Madrid remain hopeful of signing Paris St-Germain’s Brazilian forward Neymar, 27… The Spanish giants are also closing in on a deal to sign Eintracht Frankfurt’s Serbia striker Luka Jovic, 21… Maurizio Sarri has indicated that French striker Olivier Giroud, 32, will not leave Chelsea this summer.

Arsenal and Everton are considering a £13m move for Fortuna Dusseldorf’s Belgian forward Benito Raman, 24… Burnley manager Sean Dyche will not say how much he thinks Dwight McNeil is worth after the 19-year-old English winger was linked with Arsenal, Manchester City, Liverpool, Everton and Newcastle… Newcastle have told manager Rafael Benitez he will be handed around £50m each year, before player sales, if he agrees to sign a new contract… Southampton’s Northern Irish midfielder Steven Davis, 34, on loan at Rangers, has begun talks with the Scottish club over a permanent summer transfer.