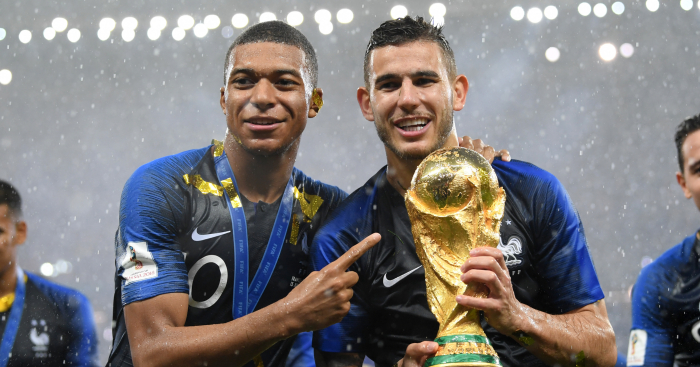 AN ODD PAUL POGBA EXCLUSIVE
You can call us cynical – and there’s a daily column in which we certainly are – but there’s something bloody fishy about Daniel Cutts’ exclusive on the future of Paul Pogba. Just as Luis Suarez is the latest Barcelona to talk up Pogba moving to Barcelona, Cutts claims that Pogba is desperate to play under Zinedine Zidane.

Now the story doesn’t make the newspaper, which is weird to start with. Surely if a news organisation is convinced by the validity of that exclusive, it would be splashed across their back page. Instead, the Sun go with Luke Shaw, Ryan Giggs and Pablo Zabaleta.

We’ll leave the rest for Mediawatch, but let’s just say that we’re not convinced.

MAN UNITED WANT HERNANDEZ
Weirdly, just as the international break hits and the amount of Premier League-related news drops, transfer stories start to seep back into the papers. We’ll start with the Daily Star, and their claim that Manchester United want Atletico Madrid defender Lucas Hernandez.

Now that’s a little bit naughty, given the information included in the original France Football story. They actually say that Hernandez signed a new contract at Atletico this summer that runs until 2024, and contains a minimum fee release clause of around £72m.

Their line is that such a figure wouldn’t necessarily put off Manchester United or Real Madrid. But that’s a long way from United signing him.

ARSENAL IN BATTLE FOR PEPE
Sadly not that Pepe, because ludicrous aggression is just about the only thing Arsenal’s calamity defence is missing. Instead it’s Nicolas Pepe, the Ivorian Lille winger who is drawing praise for his performances in Ligue 1.

Not gonna lie, the first line of the Daily Mirror’s article is pretty strong work: ‘Arsenal are looked in a three-way battle with Lyon, Seville and Real Betis for rising Lille star Nicolas Pepe.’ So that’s four-way, then. And ‘locked’, presumably.

Anyway, the Mirror pass on information from L’Equipe in which they say Arsenal are keen on the winger, but wouldn’t be prepared to pay the £31m that Lille reportedly want. So that’s that.

AND THE REST
Arsenal are eyeing a swoop for ex-Chelsea ace Filipe Luis… Manager Unai Emery is annoyed about the uncertainty surrounding the future of Ivan Gazidis… John Terry could join Sporting Lisbon if Pedro Madeira Rodrigues becomes the club’s new president.