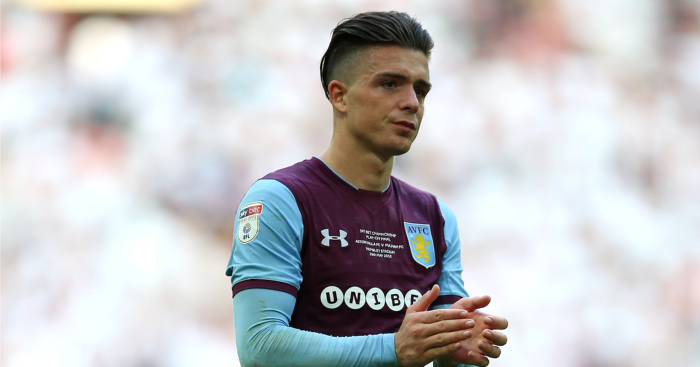 MAN UNITED TARGET, ERM, GREALISH
We did not see this one coming at all. Except, well, we would have done if we had remembered that The Sun’s Neil Ashton wrote this in November 2015:  ‘In the long term [Aston Villa] know that it will be difficult to keep a player of this calibre at Villa Park because his gilded touch will one day merit a place at a club challenging for the top four.’

So here he is in May 2018 saying that a club challenging for the top four is indeed interested in his ‘gilded touch’. And the club in question is Manchester United. Hmmm. Apparently ‘United like his driving runs through midfield from deep-lying positions’. That sounds very specific.

Anyway, Ashton also mentions that Fred will be arriving first from Shakhtar Donetsk for £44m. Elsewhere, United are being linked with three major signings, with Alex Sandro and Toby Alderweireld likely to follow Fred to the club.

MAN UNITED WANT BALE…BUT
It’s the transfer we would absolutely love to see, but it looks like Gareth Bale might be too rich even for Manchester United’s blood. The Sun claim that ‘to land Bale in a five-year deal, they would need to splash out a staggering £349million’. Now that’s rather a lot of money. Obviously they have added the transfer fee to his wages (he is the third-highest-paid player in the world) but that seems fair enough as, at 29, there will be no re-sale value.

Asked if United wanted Bale, a source close to Mourinho said: “Yes but where is the money?” The most likely end to this saga is that Bale stays at Real Madrid because nobody can afford to splash out that kind of money.

ALISSON’S STARTING TO HAPPEN
It still feels like a whole lot of money but the Daily Mail seem to be suggesting that Liverpool are looking to get some kind of bargain by offering £60m for Roma goalkeeper Alisson. They talk about Roma’s financial problems and an opportunity for Liverpool to take advantage. It’s still £60m, guys.

‘With that in mind, Liverpool will look to test Roma’s resolve for Alisson, whose reputation has continued to grow. They have been linked in the past with Stoke’s Jack Butland but Alisson is the prime target.’

The Mail suggest that Alisson has now been put in the same bracket as Virgil van Dijk; nobody else will do.

AND THE REST
Riyad Mahrez looks destined to complete a £75m switch to Manchester City…West Ham are closing in on appointing Mario Husillos as their new head of recruitment…Manchester City have had a £39m move for Jorginho rejected by Napoli, who hope Chelsea join in and spark a bidding war for the Italy midfielder…Burnley are to sign £6m Bristol City defender Joe Bryan with Southampton’s Sam McQueen joining City…Jamie Vardy has opened talks on a new £120,000-a-week Leicester deal…Wolves are lining up a £27m move for AC Milan’s Andre Silva…Arsenal are close to signing Borussia Dortmund defender Sokratis Papastathopoulos