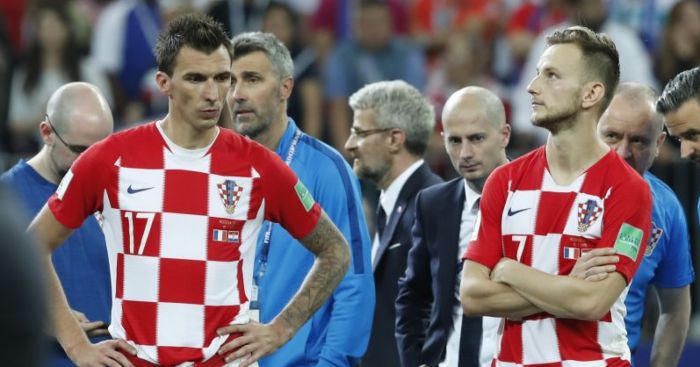 A HELPING MAND
The claim of Manchester United having reached ‘a verbal agreement’ with Mario Mandzukic was already relatively common knowledge. So F365 gossip favourite Neil Fissler’s Daily Express exclusive must instead be that Juventus want £10m before letting him go.

The Italian side ‘want to offload’ Mandzukic as he ‘has been told that he won’t be featuring in Maurizio Sarri’s plans for the season’. A move to United fell through in the summer, as well as potential transfers to Qatar or LAFC in MLS.

Croatia international Mandzukic, now 33, rejected both offers as he ‘still feels that he can play at the highest level in Europe’. Which begs the question as to why he is considering heading to Old Trafford.

IVAN THE TERRIBLE
He could be joined by fellow World Cup finalist Ivan Rakitic. Sport say his Barcelona days ‘could be numbered’ and that he ‘is closer to going out in the winter market than to end his sixth season at the Camp Nou’.

The midfielder has become ‘not essential’, starting just one game this season – and that was in the 2-0 defeat to Granada. The signing of Frenkie De Jong and the form of Arthur Melo has kept him sidelined. So he is firmly ‘on the exit ramp’ ahead of January.

Rakitic’s contract expires in summer 2021, and the player remains a little frustrated at his terms not having been renewed since 2017, even though he rejected overtures from PSG a year later. Barca believe ‘the best time’ to sell him would be in the next winter window, as waiting much longer having already decided he is surplus to requirements ‘would devalue’ him.

Inter are interested. United have also ‘gone to’ the Spanish club ‘to ask for the midfielder’. And they have been told that bidding starts at just over £35m.

CHRISTIAN BELIEF
United are unlikely to revisit the possibility of signing Christian Eriksen. And while Juventus and Bayern Munich have emerged as potential suitors, Real Madrid remains his favoured destination.

AS say the Dane ‘is still an option to strengthen the midfield in January’. But any move ‘will depend on how the team is performing and whether there are any injuries within the squad’.

Paul Pogba remains their primary target but, unlike the Frenchman, Eriksen would be cheaper in terms of both fee and wages.

But, as many have reported, any move will surely go ahead in the summer. Tottenham sure could use the funds yet the player could demand much more money himself as a free agent.

AND THE REST
Chelsea midfielder Jorginho’s agent has not ruled out the 27-year-old Italy international returning to Serie A… Bristol City want to bring in Arsenal’s England Under-21 striker Eddie Nketiah on loan. The Championship side tried to sign the 20-year-old in the summer before he opted for Leeds… Arsenal are keen to recruit Scunthorpe United’s 16-year-old English midfielder Joey Dawson, the League Two club’s youngest first-team player and the nephew of former Tottenham captain Michael Dawson.