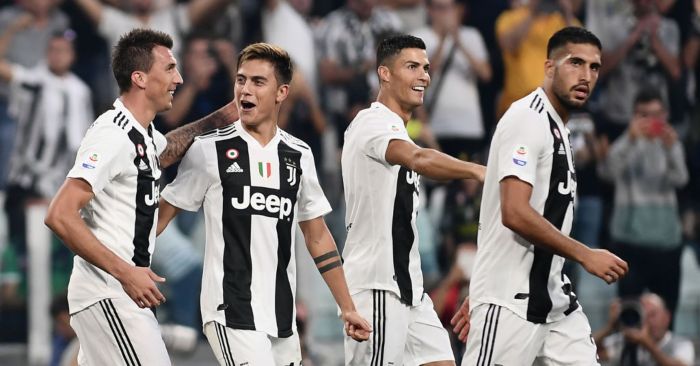 #ANNOUNCEMAGUIRE
It is unusual for official club channels to discuss an incoming transfer. Which makes the decision to namedrop Harry Maguire on Manchester United’s Twitter account all the more striking.

Ole Gunnar Solskjaer’s 41-word response to a question directly referencing the £85m Leicester centre-half is certainly enough of an update after a quiet Saturday following Friday’s announcement. The club hope to “announce something very soon”, so keep your Mondays free.

V IS FOR VERY, VERY EXTRAORDINARY
Perhaps the delay in confirming the deal can be explained by the fact United are also purusing an ‘extraordinary transfer’ involving ‘three world-class strikers’.

Duncan Castles of The Sunday Times says the club ‘have negotiated a deal’ involving Paulo Dybala and Mario Mandzukic moving to Old Trafford with Romelu Lukaku heading the other way to Juventus.

The Old Lady is ‘happy’ with the deal, namely the fact they would have to part with no money to sign Lukaku in exchange for offloading two players they don’t really want. Plus Dybala and Mandzukic can be removed from a wage ball inflated by Cristiano Ronaldo and Matthijs de Ligt’s earnings.

Dybala is valued at ‘more than £90m’ by the Italian club, who also wanted a reported £13.7m for Mandzukic. And United had demanded £80m all summer for Lukaku.

Juve have positively ‘encouraged’ Dybala to consider United’s offer instead of reporting for pre-season training. The Argentine stands to earn ‘£10m-a-year net’, while his agents are in line for a ‘more than £10m’ commission.

STATUE OF DAVID
As if all that’s not enough, Ed Woodward has also lodged a £45.7m bid for someone. Fella’s been busy.

This comes from the Portuguese version of Yahoo, whose reliability is difficult to decipher. But they say there has been ‘another chapter’ in the future of David Neres, former Liverpool and Everton target.

The striker had agreed to extend his contract with Ajax this summer, with the deal planned to be signed on July 27. But ‘everything changed’ with United’s offer. Neres’ head has been turned.

With that said, Ajax won’t settle for anything less than £64m. Sao Paulo are due 23% of his next sale,

AND THE REST
Arsenal are set for talks with Barcelona over a loan deal for Brazil international midfielder Philippe Coutinho, 27, which would reportedly cost the club £27m… France international Paul Pogba fears he could be priced out of a move to Real Madrid with the Spanish giants facing a staggering £270m bill to sign the 26-year-old from Manchester United… Bayern Munich are closing in on a deal for Manchester City’s German winger Leroy Sane after agreeing contract terms with the 23-year-old… Sane faces the prospect of losing a staggering £11m in wages if he continues with his refusal to sign a new contract with Manchester City… Manchester City boss Pep Guardiola is weighing up late moves for Real Madrid’s Spanish midfielder Isco, 27, and Bournemouth’s Dutch central defender Nathan Ake, 24… Crystal Palace boss Roy Hodgson is bidding to sign his former England defender Gary Cahill, 33 on a two-year deal… Leicester City boss Brendan Rodgers is planning a surprise £15m swoop for Celtic’s Norway international defender Kristoffer Ajer, 21… Burnley have joined Crystal Palace in the race to sign Real Betis’ Spanish midfielder Victor Camarasa, 25, who spent last season on loan at Cardiff City… Tottenham are set to sign England Under-21 midfielder Ryan Sessegnon, 19, from Fulham, but may miss out on 23-year-old Argentina and Real Betismidfielder Giovani lo Celso as a result…