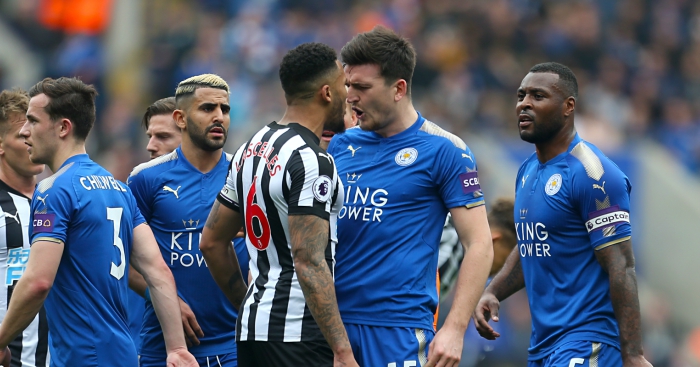 CRAFTY FOXES
There has been a ‘timely boost’ in Manchester United’s pursuit of Harry Maguire. No, not that Nemanja Matic could play centre-half. In fact, it’s not directly to do with United at all. This update is courtesy of Leicester City.

According to a Sun exclusive, the Foxes are targeting Jamaal Lascelles. They think they can get their man for £35m, which would free up United to make a £60m move for Maguire. Although the Daily Star say he would cost £80m. Either way, is Maguire considerably better than the younger centre-half who is captain of his club?

Leicester are also interested in ‘outstanding centre-half’ Djene Dakonam, and are in talks with Getafe over a £31m move.

BABY BAILLY, BAILLY, BAILLY
Elsewhere in the world of Manchester United and centre-halves, the Manchester Evening News have the latest on Eric Bailly, who must feel awfully wanted this summer.

Despite Mourinho openly chasing someone to jump ahead of him in the pecking order, United have informed Bailly that ‘he is not for sale’, and ‘his future is secure’.

Bailly himself has ‘no intention of seeking a move’ – although that could change if his ‘punishment continued’. His ‘punishment’ being a lack of games because Mourinho believes he is ‘brittle’.

Marcos Rojo and Matteo Darmian are far more likely to leave to free up both funds and squad space for an incoming defender. Wolves want the former.

HAZARD WARNING
Let’s finish with Chelsea, who still ‘want a world-record fee’ for Eden Hazard. Which is fair enough.

The Blues will request an offer ‘in excess of £200million’ if Hazard is to leave, with the Daily Mail saying that the club hope the price tag will ‘act as a deterrent’ to Real Madrid.

Maurizio Sarri really wants to work with the Belgian and Willian, with reports elsewhere even claiming the former could be made captain to stay.

ALL THE REST
Chelsea have made Everton’s England international goalkeeper Jordan Pickford, 24, their main target should current number one Thibaut Courtois, 26, leave for Real Madrid this summer… Crystal Palace are keen to sign striker Danny Ings but will have to meet Liverpool’s £20m valuation for the 26-year-old… Leicester City, Newcastle United and Southampton have also made bids for Reds striker Ings… Juventus defender Daniele Rugani has agreed a move to Chelsea but the 23-year-old Italian international’s agent says the Serie A club have no desire to sell… Crystal Palace remain interested in signing Senegalese midfielder Cheikhou Kouyate, 28, with West Ham listening to offers of around £10m for the player… Chelsea are considering keeping club-record signing Alvaro Morata, 25, this season and have yet to lodge a bid for Juventus forward Gonzalo Higuain, 30.