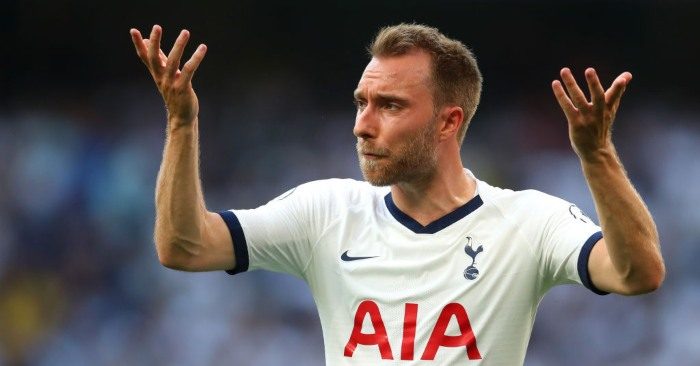 MAN UNITED STILL WANT ERIKSEN
The closing of the European transfer window hasn’t ended the circus around Christian Eriksen. Nor has it slowed the conjecture around his future. According to The Sun, Manchester United will pursue their midfielder in January, at which point Eriksen will have just six months left on his Tottenham contract and – presumably – be available for an incidental fee.

United’s earlier interest ended when it became clear that the player wasn’t especially interested in a move, so it’s difficult to know what’s changed – or what would change this time next year, when he’s available on a free transfer and being presented with a far broader range of options.

…BUT SO DO INTER MILAN
The Express think that Inter Milan would also rather like Eriksen and that does make slightly more sense. Much will depend on how life actually develops for them under Antonio Conte, because Inter do have a habit of finding the absolute worst in every situation.

Nevertheless, there’s certainly room for Eriksen in that midfield (currently Sensi, Vecino, Brozovic) and restoring Inter back to where they were under Jose Mourinho would certainly qualify as a new challenge for the Dane.

BEN ARFA DONE?
Former Newcastle winger Hatem Ben Arfa is still making plenty of friends across Europe. Ben Arfa was released by Rennes at the end of last season and – according to his Instagram account at least – he’s yet to receive an offer that interests him.

The Mail have covered the story and do include an interesting chronology of his many feuds and fallings out in the past. Ben Arfa is absurdly talented, nobody would deny that, but it’s hardly a surprise that he’s without a club at the age of just 32. Anyway, West Ham apparently had a sniff over the summer.

Of course they did.

AND THE REST
Chris Smalling expect to stay at Roma after his loan…Lucas Silva has been released from his Real Madrid contract…Tottenham want to sign Ryan Sessegnon’s brother, Steven…Nigeria want Tammy Abraham to play his international football for them…Emre Can has been left out of Juventus’ Champions League squad.