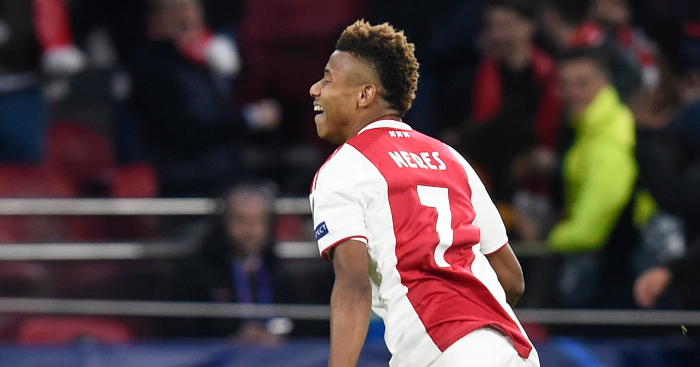 PORTUGAL. THE MAN
After an Ashley Young disasterclass in the Champions League on Wednesday, there is only one way Manchester United can really respond: by signing a new central midfielder.

Portuguese outlet A Bola say United are one of ‘this batch of European emblems’ chasing Bruno Fernandes. ‘Informal contacts’ have already been made over a player who has scored 27 goals and assisted 15 in 46 games. With that kind of record, you’d think so.

Milan are the only other club mentioned by name as competition for a player who has a release clause of €100m. But can he play at right-back?

STATUE OF DAVID
It was faintly inevitable that David Neres would be linked with a move elsewhere after his goal in Ajax’s 4-1 win over Real Madrid in the last 16 of the Champions League, even leaving aside his subsequent goal in the quarter-final against Juventus on Wednesday night. He is one of the most coveted members of this brilliant young squad.

Le10Sport certainly seem to have noticed, and they take a look at UOL Esporte’s claim that PSG want to sign the forward. This is some kind of gossip-ception now.

They clarify that PSG’s interest is ‘real,’ but ‘not concrete’. Dortmund have already bid €40m (£34.5m) for Neres, while Liverpool ‘follow’ his development. But Le10 adds that the Reds ‘have not submitted a proposal for now’.

By the time this news reaches our shores, it takes on a whole new meaning. Not only are Le10 billed as ‘Mercato’, meaning we are supposed to believe a French website called ‘Market’ is running the rule over the transfer window, but Everton are thrown into the mix.

The Daily Mirror say Liverpool ‘could potentially hijack Everton’s summer plans to land’ Neres. combining old speculation with new to create something of a ‘Merseyside battle’. It is one Marco Silva is confident of winning, as he believes ‘the lure of first team football from the off could swing things in the Toffees’ favour’.

But this gossip column has just one question. With Everton having been linked before, is it not possible that Le10 have got their Liverpool-based wires crossed and suggested the wrong club are interested, with everyone else subsequently lapping up a rumour they can attribute elsewhere? Just a thought.

SPORTING CHANCE
Liverpool should be too busy dealing with the blow of losing one of the key players in this Premier League title race. And we are only half-joking when describing Rafa Camacho as such.

Jurgen Klopp hailed the Portuguese for making “the most important challenge of his life” in stoppage time of the 4-3 win over Crystal Palace in January, preventing Wilfried Zaha from sealing a memorable comeback at Anfield. But a lack of further opportunities could see him leave this summer.

The Sun claim he has rejected the offer of a new deal and ‘could sign a pre-contract’ with any of numerous interested foreign clubs next January. A delightfully vague mention of sides ‘in Germany, Spain, France and Portugal’ follows, as they are monitoring developments.

Sporting are at least named, and they ‘are ready to offer regular first-team football in his preferred left-wing position’. Liverpool are unlikely to do so for some time, so the 18-year-old might well leave for pastures new.

AND THE REST
Welsh forward Gareth Bale, 29, is not in Real Madrid’s plans for next season and the Spanish side will allow him to choose his next club with Manchester United and Bayern Munich interested… United midfielder Juan Mata, 30, is yet to decide on his future at Old Trafford and the Spaniard has had offers from other clubs… Manchester City, Manchester United and Barcelona are all interested in Atletico Madrid’s Spain international midfielder Saul Niguez, 24… Chelsea and Belgium forward Eden Hazard, 28, believes it is ‘now or never’ for his move to Real Madrid… West Ham are leading the race to Liverpool’s English right-back Nathaniel Clyne, 28, who is currently on loan at Bournemouth… West Brom are ready to approach Preston manager Alex Neil to become their new boss… Newcastle have approached Nuremburg over the transfer of German midfielder Patrick Erras, 24… Turkish side Besiktas are interested in Everton and Senegal striker Oumar Niasse, 28, who is currently on loan at Cardiff… Leicester manager Brendan Rodgers wants to sign a striker in the summer to provide competition for former England forward Jamie Vardy, 32.