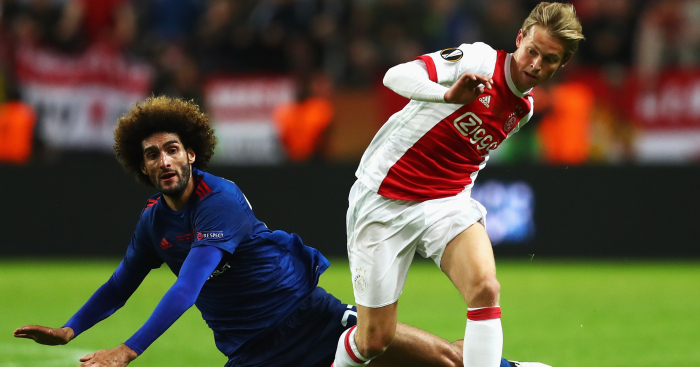 UNITED CONVINCED OVER DE JONG
It sounds like a cushy number being a scout at Manchester United. Rather than bother with the hassle of unearthing new talents, it seems the Red Devils wait to see who their rivals have been watching before taking a look for themselves.

That seems to be the case with Ajax midfielder Frenkie de Jong. The Sun are running quotes from ‘an Old Trafford source’ who has helpfully spilled the beans over United’s opinion of the Holland international.

“The club decided to take a look at him as they have been getting rave reviews from elsewhere. Jose and the staff like the look of him. He can play in a few different roles and he looks comfortable wherever, which is a big plus.”

Indeed it is. Daniel Cutts’ mole continues: “The scouts were already sure he is the real deal but his display against France only intensified that belief even further.”

If United decide to follow up their interest, they’ll have to fork out a Fred-sized fee. Manchester City are said to have had an offer in the region of £50million turned down in the summer.

MAIER OF LONDON OR MANCHESTER?
Word of another young midfielder seems to have got back to those intrepid talent spotters at Old Trafford.

Perhaps it was Arsenal’s interest that first alerted them to Hertha Berlin teenager Arne Maier but, according to Sport Bild, United have “intensively watched” the 19-year-old defensive midfielder ever since.

Maier has played every minute of Hertha’s Bundesliga season so far and they have made a decent start – they sit fourth in the table after two wins and a draw. The teenager has played at every youth level for Germany and made his Under-21 debut earlier this month.

AND THE REST
Liverpool have been boosted by the news that Juventus have dropped their pursuit of Cagliari midfielder Nicolo Barella…Raul Sanllehi is hoping to reunite Sevilla midfielder Ever Banega with Unai Emery… Sanllehi is also interested in Boca Juniors forward Cristian Pavon.