Man Utd have their fingers in at least three Premier League-based pies. Everton aren't all too happy about it. 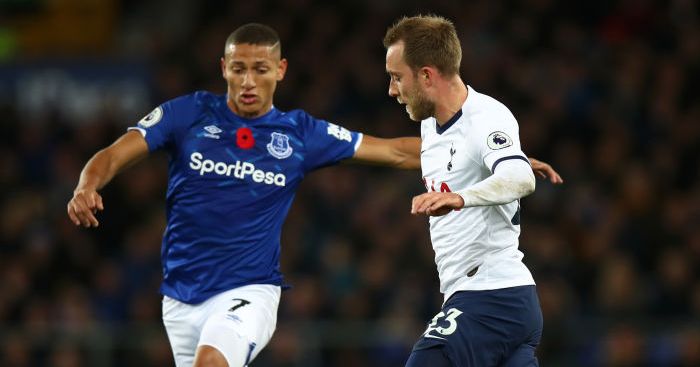 CHRISTIAN BELIEF
It seems that we are consigned to five more months of every Tottenham match being followed by questions about Christian Eriksen’s future, with the same old Jose Mourinho answers. Because Manchester United ‘are ready to wait until the end of the season’ to sign him.

While ‘clubs are aware’ they could sign him for a knockdown price of £40m in January, the prospect of bringing him in for nothing in the summer is particularly tantalising for United.

This all comes from the Sunday Telegraph, who suggest Real Madrid no longer need him because Federico Valverde has emerged as a potential long-term replacement for Luka Modric. Juventus and Inter Milan remain interested; United can probably offer more money than both.

GREAL THING
That story contains a few nuggets of information about another United target. Jack Grealish is one more player they are ‘following closely’. He, too, ‘has admirers at Old Trafford’.

It amounts to little more than United realising that Grealish is a) quite good, b) quite young and c) quite English. And that they are exploring whether he ‘would be on the market’ if Aston Villa are relegated.

No valuation is mentioned. It has become rather difficult to put a price of his beautiful, slicked head.

STEAL FROM THE RICH
United seem intent to no look further than the end of their nose for new players. Which makes Richarlison an ideal target over at Everton.

But The Sun say Carlo Ancelotto ‘will BLOCK’ any move for the Brazilian, who is ‘central to his re-building plans on Merseyside.

The story adds that Ancelotti, even with the presence of director of football Marcel Brands and majority shareholder Farhad Moshiri, ‘has ultimate power’. So even a bid of £70m might not be enough.

CENTRAL HEATING
Indeed, ‘any plans’ for the Toffees ‘will surround different positions than up front’. Centre-half would seem a sensible place to reinforce, as Yerry Mina, Michael Keane and Mason Holgate is hardly a foolproof selection.

Jean-Clair Todibo, the 19-year-old Barcelona centre-half, is a £22m target. And Napoli midfielder Piotr Zielinski is also mentioned in passing.