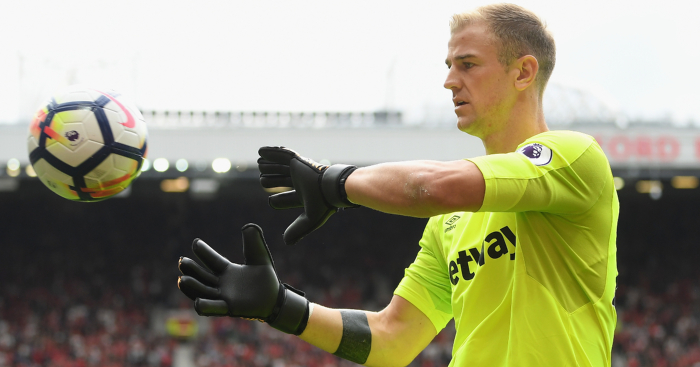 HART’S BEST OFFER?
One of the biggest questions raised over the last few weeks has been: where the hell does Joe Hart go from here? Well, the answer could be ‘Man Utd’.

According to The Sun on Sunday, United are keen to take Hart to act as back up for David De Gea next season, with the former (too soon?) England keeper set to be sold for a cut-price fee despite having a year remaining on his contract at Manchester City.

It’s hard to forsee that Hart will get many better offers after a wretched couple of years led to him being bombed out by Gareth Southgate for the World Cup.

Of course, United already have a No.2 that Jose Mourinho was perfectly happy with. But, apparently, that feeling is no longer reciprocated by Sergio Romero after the keeper was axed for the FA Cup semi-final and final. The Argentina keeper was hoping to put himself in the shop window at the World Cup, but a knee injury has banjaxed that plan.

There are other names in the frame for United’s bench, with Celtic’s Craig Gordon and Ben Foster being considered.

EMERY EYES KEEPER REUNION
United aren’t the only club to be looking at keepers this summer. Arsenal too are apparently keen to strengthen their last line.

Arsene Wenger was said to be considering recruiting a long-term replacement for Petr Cech this summer and Unai Emery is seemingly of the same mind. Bernd Leno has long been linked with a move to the Emirates but it seems a new name has displaced the Bayer Leverkusen keeper in Arsenal’s thinking.

The Sun on Sunday quotes reports in Spain suggesting that Emery wants to bring Sergio Rico with him to north London. The pair worked together at Sevilla, with the once-capped Spain international already expected to move on this summer.

The easiest/laziest transfer link is that of a new manager and their former players, and though Emery gave Rico his Sevilla debut, the 24-year-old hasn’t shown a great deal that would suggest he would be a decent upgrade on Cech.

SARRI’S AT IT TOO
Speaking of new managers recruiting former players, Maurizio Sarri supposedly wants to bring three Napoli players with him to Chelsea should he get the Blues gig.

The Sunday Express says Sarri wants to bring £180m worth of talent with him to Stamford Bridge: defenders Kalidou Koulibaly and Elseid Hysaj and Poland midfielder Piotr Zielinski.

Koulibaly has been linked with Chelsea seemingly since the dawn of time but the Blues have never fancied coughing up Napoli’s asking price.

Their Serie A raid might not stop there. Reports on the continent suggest Chelsea want to offer Alvaro Morata – the striker who cost around £60million last summer – and around £35million to Inter Milan for Mauro Icardi.

AND THE REST
Jurgen Klopp will have more than £200m to spend this summer, with forwards Nabil Fekir and Christian Pulisic among his chief targets…Anthony Martial has opened talks over a new deal with Manchester United despite falling down the pecking order at Old Trafford this season…Everton are looking to swoop for Tottenham left-back Danny Rose after both Manchester clubs cooled their interest…Ross Barkley is already growing frustrated with life at Chelsea…Newcastle have slapped a £30m price tag on defender Jamaal Lascelles to scare off West Ham, but the rest of their transfer business remains on hold until Rafa Benitez’s future is sorted…Bournemouth lead the race to sign Leeds defender Tom Pearce…

Borussia Dortmund have held further talks with Chelsea over the permanent signing of striker Michy Batshuayi…Juventus are hopeful of securing an £11.5m deal with Manchester United for out-of-favour defender Matteo Darmian…Arsene Wenger is considering a return to managing in Japan…Eric Bailly is happy at Manchester United and has no intention of leaving the club this summer…Man City are expected to confirm Phil Foden’s new contract this week, with the young midfielder set to sign a £25,000-a-week five-year deal…Yaya Toure wants £100,000-a-week to stay in the Premier League and could be of interest to new West Ham manager Manuel Pellegrini…

Maurizio Sarri wants to bring £180m worth of Napoli talent with him if he becomes Chelsea boss – defenders Kalidou Koulibaly and Elseid Hysaj and Poland midfielder Piotr Zielinski…Tottenham will have to smash their transfer record to sign Ajax prodigy Matthijs de Ligt, who has an asking price of £50m…Chelsea will offer striker Alvaro Morata to Inter Milan as part-exchange for Mauro Icardi…West Ham have edged ahead of Leicester in the race to sign young Barcelona defender Marlon.