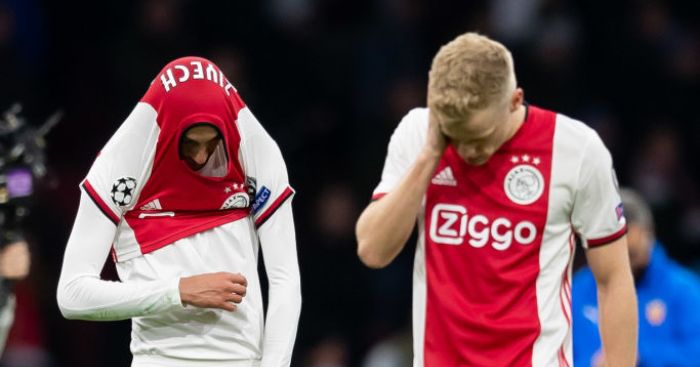 BETTER CALL PAUL
You know what they say: it’s not a transfer window until Paul Pogba gets involved.

With January a matter of weeks away, Manchester United’s New Year’s Resolution will be to sign two central midfielders before the start of next season. The Daily Mail do not specify whether they will join in the winter or the summer, just that it ‘will open the door’ for Pogba’s departure.

The Frenchman has 18 months left on his contract, with United having an option to extend that by another year. They even ‘made a tentative approach’ to enter negotiations over a new deal, but Pogba ‘was not interested’.

He still fancies Real Madrid or Barcelona, so United ‘have prioritised signing two central midfielders’ (and a striker) by August. Chris Wheeler names two of their ‘number of options’: Donny van de Beek of Ajax and Atletico Madrid’s Saul Niguez.

INTER THE UNKNOWN
After making 17-year-old Sepp van den Berg and 16-year-old Harvey Elliott their two preferred signings in the summer – Adrian and Andy Lonergan were signed after pre-season so calm down – Liverpool appear to have developed a taste for teenage talents.

Sebastiano Esposito might not be a name the layman is familiar with, but he has caught the eye of a few European clubs. FCInterNews.it say the Nerazzurri have fielded some ‘very rich offers’ from Liverpool, Manchester City, PSG and Dortmund for the 17-year-old.

The striker is ‘happy’ in Milan and he and his team ‘have rejected any kind of advances’. Inter plan to offer him a five-year contract extension and ‘an adjustment of the salary’ when he turns 18 in July. Antonio Conte considers him ‘a puppy to grow slowly’. Well alright.

A further indication of Esposito’s contentedness in Italy is that he will not be changing agents – his family presumably represent him now – despite reports of interest from both Mino Raiola and Francesco Totti. Imagine that as a 17-year-old Italian who was four years old when Il Gladiatore won the bloody World Cup.

THAT’S YOUR LOTTI
The strange timing of the announcement of Carlo Ancelotti’s Napoli sacking does not naturally lend itself to immediate stories of his future. But the Daily Telegraph acted swiftly to describe him as Everton’s ‘new top choice’ to replace Marco Silva.

Vitor Pereira is no longer an option, much to the delight of Alan Brazil and Harry Redknapp. So Everton ‘are now ready to make an approach’ for the Italian, who ‘is understood to be open to the prospect of a return to England’.

That story is at pains to detail Arsenal’s potential interest. The Daily Mail similarly say the Gunners ‘will seek formal talks’ with the former Chelsea manager.

Ancelotti will ’emerge as a prime contender’ to succeed Unai Emery due to not only his availability, but his strong command of the English language and fine track record in coaching. Josh Kroenke is said to ‘see the value’ in appointing a former player but they are ‘keeping an open mind’.

AND THE REST
Liverpool, Manchester City and Chelsea are among six teams interested in Paris St-Germain’s Brazilian forward Neymar, 27, and Kylian Mbappe, 20… Manchester City need a new defender and head the queue to sign French star Samuel Umtiti, 26, from Barcelona… If they miss out on Umtiti, Manchester City will raid Bournemouth for Nathan Ake, 24, but could face competition from the Dutchman’s former club Chelsea… Juventus have tabled an opening offer for Chelsea attacker Willian, 31, whose contract runs out in the summer… Zlatan Ibrahimovic could make a shock return to the Premier League after Everton offered the 38-year-old Swede a £4m-a-season deal.