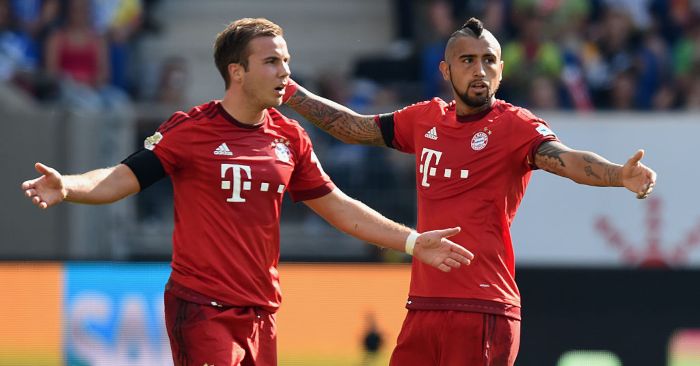 THE ART OF THE DEAL
Their chances of signing Nico Gaitan or Wesley Sneijder appear to have truly diminished, but Manchester United could be on the verge of bringing in Arturo Vidal after all these years.

The Chilean midfielder was initially linked with a move to Old Trafford in the summer of 2014, with Louis van Gaal instead settling on Ander Herrera and Daley Blind when he proved too difficult to sign. Similar rumours surfaced regularly under Jose Mourinho. Ole Gunnar Solskjaer has now joined the party.

According to Corriere Della Sera, United have ‘also entered’ the race to sign Vidal, alongside Inter Milan. And that is the entirety of their mention in a story that describes the midfielder as ‘irritated’ and ‘underutilised’ at Barcelona.

The 32-year-old has played 20 of a possible 25 games in La Liga and the Champions League this season, but started only six of those. And while Ernesto Valverde ‘considers the player useful’ – and Vidal ‘knows he has Leo Messi on his side’ – that won’t change anytime soon.

Vidal, who ‘annoyed’ Barca by recently requested to be paid approximately £2m in bonuses owed to him by the club, reportedly demanded to be allowed to join Inter Milan in January. The response was that he would not be sold in the winter but a valuation of €20m (£16.9m) has been set and agent Fernando Felicevich has already flown to Italy for negotiations.

It should be stressed that United are literally mentioned once in passing in the entire story, with Inter a much more likely destination and the club continuing to embarrass themselves in the transfer market. It didn’t happen six years ago, and it won’t now.

IT’SA ME…
The Daily Mirror rather ambitiously use ‘former Man Utd target’ to describe Mario Gotze, who we cannot really recall ever being linked that often with a move to Old Trafford.

Indeed, Liverpool or Manchester City would seem more apt, what with the managerial connections, while Arsenal were rumoured to be interested under previous regimes.

But anyone, Bild say Gotze’s days at Dortmund ‘are numbered’. They state in no uncertain terms that the two parties ‘will separate at the end of the season’. What’s more, they are both ‘so hardened that there will also be no agreement’. Ooo, matron.

It is worth noting that no potentially interested parties are mentioned. Bild say only that, as a free agent, Gotze will be able to demand a higher signing fee. And no, not from Man Utd.

HAMMERS BLOW
The first setback of David Moyes’s nascent and excellent West Ham reign has been landed. The Guardian say that ‘attempts’ to sign Benfica
midfielder Gedson Fernandes on loan ‘have stalled’.

The 20-year-old is still ‘expected to move’ in January but the emergence of Everton as a possible destination has complicated matters. Carlo Ancelotti’s side want Fernandes on an 18-month loan, while West Ham’s negotiations ‘are yet to progress far’.

Morgan Sanson of Marseille is also a potential target, while reinforcements at right-back are also on the agenda. Nathaniel Clyne and Javier Manquillo of injuries and Newcastle respectively are on the shortest of lists.

Who else is excited for them to sign Jordan Hugill on deadline day again?

AND THE REST
Aston Villa have been in contact with Crystal Palace over a move to re-sign Belgian striker Christian Benteke, 29… Villa have been offered the chance to sign Spanish former Liverpool goalkeeper Pepe Reina, 37, from AC Milan… Inter Milan have enquired about Man Utd captain Ashley Young, 34… Newcastle United are interested in signing former Liverpool winger Ryan Babel from Galatasaray. The Turkish side are keen eager to offload the Dutchman in January with Ajax also considering a move… Everton want to take Juventus’ French midfielder Adrien Rabiot, 24, on loan until the end of the season… Napoli are interested in Brighton’s French striker Neal Maupay, 23… Liverpool, Chelsea and Tottenham are among the clubs monitoring Brighton’s English defender Ben White, 22, during his current loan at Leeds United… Arsenal are unlikely to make permanent signings in January and will instead focus on loan deals… A number of English clubs are in talks over a move for England Under-19 international midfielder Marcus McGuane from Barcelona… Aston Villa want to sign Middlesbrough striker Britt Assombalonga, 27, as cover for injured Brazil international Wesley.