Home Gossip Gossip: Man Utd linked with all the centre-backs 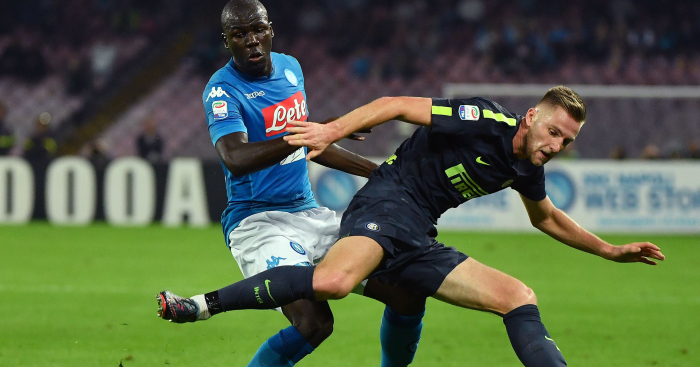 MAN UTD’S MANY CENTRE-BACK SHORTLISTS
It’s that time of year when it’s customary to take a guess at Manchester United’s list of summer targets, and everyone has had a go this morning.

Central defence is the obvious priority for United, just as it was last year when they did absolutely nothing to rectify an obvious weakness, despite supposedly identifying an eight-man shortlist. The Manchester Evening News says this year’s list is down to three: Kalidou Koulibaly, Milan Skriniar and Sampdoria’s Joachim Andersen.

The Sun, quoting the Daily Star, includes the first of those two names in a list of five which also features Toby Alderweireld, Harry Maguire and Alessio Romagnoli. But they are all on the B list, with the A list comprising of just one name: Raphael Varane.

This looks like a fun game so we’ll have a go. This summer, Manchester will target Diego Godin, Sergio Ramos, Tony Adams, Franz Beckenbauer and the ghost of Bobby Moore.

ARSENAL AND SPURS EYE GERMANY DEFENDER
One centre-back Man Utd haven’t been linked with is Matthias Ginter. So, according to Sky Sports, Arsenal and Tottenham are going for the Borussia Monchengladbach star instead.

Spurs were said to be interested when the Germany defender moved to ‘Gladbach from Bourussia Dortmund in 2017 and they haven’t seen anything in the 18 months since to put them off. The contract situations of Alderweireld and Jan Vertonghen could leave Mauricio Pochettino light at the back, while Arsenal already are struggling.

Where Ginter would fit into Arsenal’s £40million budget for the summer remains unclear. The 25-year-old has two years left on his contract at ‘Gladbach so he won’t come cheap.

AND THE REST
PSG could move again for Chelsea midfielder N’Golo Kante…Jose Mourinho is discuss a return to Inter Milan…Arsenal are leading the race to sign Benfica left-back Alex Grimaldo…Liverpool and Chelsea are keen 18-year-old midfielder Sandro Tonali but Brescia could ask for £43.8m if they are promoted to Serie A…Chelsea watched Benfica duo Joao Felix and Ruben Dias and Sporting’s Bruno Fernandes in the Lisbon derby…United could also move for Felix because contract talks with Juan Mata have stalled.