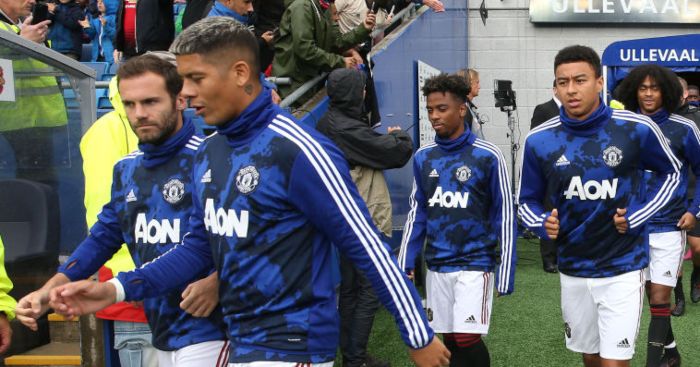 END OF AN ERROR
With Matteo Darmian having left Manchester United in the summer, transfer gossip columnists must have feared there would be absolutely nothing to write about. They can be forgiven for forgetting Nemanja Matic and Marcos Rojo, forever destined to be described as ‘flops’ without a future.

The Daily Star exclusively claim both ‘have been told they can leave the club next month’. And that will suit both Matic, who has ‘been less than impressed with his treatment’ from Ole Gunnar Solskjaer, as well as Rojo, who is ‘desperate to leave’.

The former is commanding interest from at least two unnamed Premier League clubs – Liverpool could do with an immobile Serb – while Rojo has potential suitors abroad.

Matic last started a Premier League game in September. Rojo will happily remind everyone that 90 of his 120 Premier League minutes this season came in a draw against Liverpool. And ‘Ed Woodward is prepared to sell them to the highest bidder’. Does anyone have any spare change?

LOVING ANGEL INSTEAD
United want rid of those two. But a third player could leave against their wishes.

The Daily Mail say ‘unsettled’ teenager Angel Gomes might be ‘open to a move away from Old Trafford’. His contract expires at the end of the season, thus he can open contract negotiations with European clubs in January. And Barcelona quite like the sound of that.

It is described as ‘an awkward situation’ for a club so focused on youth development, with Tahith Chong in a similar situation. United ‘hope’ they can still convince both to stay, but ‘there is growing concern’ at least one will leave.

PANIC! AT THE ISCO
What we always particular enjoy is convoluted speculation that concerns more than one player, more than one club and more than one rumour. It’s like transfer dominoes in that if you knock one over at the wrong angle, it all goes to sh*t.

So to the Daily Mirror we go, as they say Chelsea signing Isco for £44m could ‘make way’ for Real Madrid to sign Christian Eriksen from Tottenham.

Isco is said to be ‘under consideration’ by Frank Lampard, for whom spending nothing in one transfer window is enough to persuade him he needs to spend triple figures at every opportunity. And Real Madrid letting him go will mean they finally have space to bring in Eriksen either in the winter or next summer.

What odds can we get on neither deal happening, never mind both?

AND THE REST
Barcelona are already planning for next season and want to bring Paris St-Germain and Brazil forward Neymar back to the club… Arsenal and Bosnia-Herzegovina defender Sead Kolasinac, 26, is a transfer target for Napoli and Roma… Borussia Dortmund will not sanction the sale of England winger Jadon Sancho, 19, in January… AC Milan have placed a £26m price tag on midfielder Franck Kessie, with Wolves keen on signing the 23-year-old Ivory Coast midfielder in January… Fulham and Brentford are considering moving for Jack Clarke, 19, in January if Tottenham recall the winger from his loan spell at Leeds.