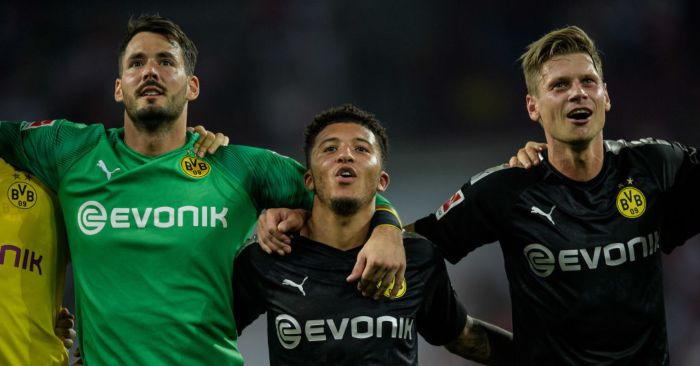 COURT SANCH
Considering the only signing Manchester United have made in the past four January transfer windows was that of Alexis Sanchez, the London Evening Standard’s claim that they are ‘prepared to wait’ until next summer to do major business is understandable.

It was thought that Ole Gunnar Solskjaer would be given sufficient financial backing to replace both the outgoing Chilean and Romelu Lukaku immediately, yet both have been shuffled out of the exit door with no successor. United do have eight forwards, mind, so they should be OK.

The Standard say Solskjaer was ‘happy to sanction’ the above moves with no signings coming the other way, and that an ’emergency replacement’, such as Fernando Llorente, will not be sourced. The Norwegian also ‘accepts it will be difficult to secure top class targets’ in the notoriously tough winter window.

His and the club’s ‘leading target’ is still Jadon Sancho, who does seem more attainable than before. There will be ‘a renewed interest’ in the £100m-rated Borussia Dortmund winger, whose recent new contract ‘has not put United off’.

United scouts are said to have ‘looked closely’ at Nicolas Pepe this summer before his Arsenal move, while they also courted Paulo Dybala. While signings in January ‘have not been ruled out’, their ‘major business is expected to be left until next summer’.

TIEM’S UP
Chelsea signed Tiemoue Bakayoko for £40m in July 2017. The midfielder has played more league games for AC Milan than the Blues in the subsequent two years. So for them to get anything close to their money back would be a miracle.

Yet Mohamed Bouhafsi of RMC Sport suggests that is a possibility. Chelsea have been desperate to find a suitor for Bakayoko all summer after Frank Lampard quickly decided he was surplus to requirements. Milan’s interest soon cooled and few others have even had a sniff.

It was claimed last week that a loan move to Monaco had been blocked on the proviso that it was not enough of a platform for him to attract permanent buyers. But there has been a change of heart at Stamford Bridge as they clearly want to free up some locker space.

Bouhafsi says a loan return to the Stade Louis II is in the pipeline, with an option to buy for around £31.9m at the end of it. ‘The player is already in agreement,’ so Chelsea just need a little bit more convincing.

GREEN ROOM
Poor Arsenal will not be too pleased with Mike McGrath’s Sun exclusive of interest in their 17-year-old striker Sam Greenwood. Juventus and AC Milan are said to be ‘looking’ at the youth who scored three goals in as many games for England at the U17 European Championships this summer.

Clubs in Germany have, rather predictably, ‘been alerted’ to the fact he is really quite good. It does sound like the noise of an interfering agent, which sounds familiar.