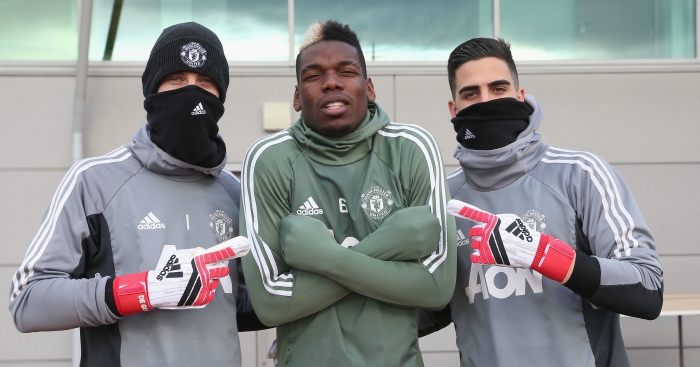 DEAL BREAKER
It feels like a lifetime ago when Stormzy unveiled the most expensive signing in football history. Paul Pogba’s move to Manchester United has not gone particularly to plan for any of the involved parties, with the midfielder ‘isolated’ at the midtable club.

But the five-year contract he signed in 2016 remains watertight, a marriage between a husband that desperately wants to stray and a wife willing to pretend otherwise. United are so oblivious to the situation that they ‘are hoping that they will be able to secure’ the Frenchman to ‘a long-term deal’.

This comes from the Daily Mirror, who say that while Pogba’s commitment to Old Trafford is ‘total’ for now, ‘he believes his future is at the Bernabeu’.

As such, he will ‘resist’ any and every ‘attempt to convince him’ to pledge his future to United for longer than is necessary. The club have the option of extending his stay by another 12 months, but, in all honesty, it really won’t get that far. Another season and he’s probably off.

STATUE OF DAVID
The Sun say United are spending their time a little more wisely than with trying to persuade unsettled players to stay. Their ‘spies’ are apparently ‘scouring Europe for goalkeepers’.

This has sparked ‘fears they may sell David de Gea in January’, because of course clubs don’t scout players with a view to signing them in the summer.

United are understandably said to want ‘to avoid missing out on a hefty fee’ for De Gea, thus a winter sale seems more likely. His contract expires at the end of the season and, despite the media hyperbole, there has been no update on whether or not he has signed the new deal on offer.

The Sun say that ‘insiders believe he will be sold in the next window,’ with ‘contingency plans’ established in that event. Their ‘scouting mission’ involves Atletico Madrid’s Jan Oblak and Dinamo Zagreb’s Dominik Livakovic.

As for De Gea, PSG want him and United reckon that, even in January, they could get £30m.

CHRISTIAN BELIEF
Two of the stories of the summer look to have reached their conclusion a day before the summer transfer window closes. Sky Sports say Neymar has agreed to ‘fulfil the remainder of his contract and commitments’, which would clearly put Christian Eriksen’s move to PSG in jeopardy.

AND THE REST
Bayern Munich still want to sign Manchester City’s Leroy Sane – even though the German winger, 23, is set for a lengthy injury lay-off… Rangers and Roma have enquired about taking Manchester City’s England Under-21 midfielder Phil Foden, 19, on loan… West Ham and Mexico striker Javier Hernandez, 31, has handed in a transfer request as he edges closer to a move to Sevilla… Borussia Dortmund are the latest club to show an interest in Liverpool striker Bobby Duncan, 18, with the Bundesliga outfit keen to bring in more English talent alongside Jadon Sancho… Inter Milan striker Mauro Icardi, 26, is threatening to sue the Serie A club, because the Argentina international is unhappy about being dropped from the first team.