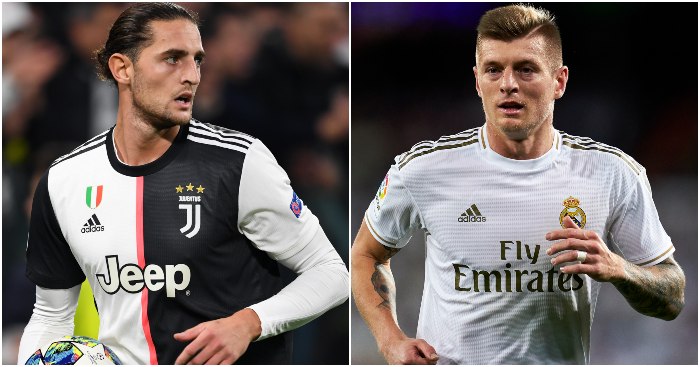 UNITED OFFERED SEPARATE SWAP DEALS FOR POGBA
Neither Real Madrid nor Juventus can afford to buy Paul Pogba outright. If they could, Manchester United would probably have shaken off their ‘virus’ last summer. But still the France midfielder remains at Old Trafford, much to his obvious displeasure.

But there are more ways to relieve United of Pogba than a simple cash transaction and both Real and Juve are apparently looking to get creative. The Sun is running separate stories claiming United will be offered their choice of part-exchange deals, with Real offering Toni Kroos in part-exchange, while Juve are tabling Adrien Rabiot plus cash.

In the Kroos story, it is claimed United wanted £180million for Pogba in the summer but now a £100million package ought to do it. When it comes to Rabiot, it is said that the France midfielder, who moved to Juve only in the summer, is valued at £25million and the Serie A side would still need to find around £60million in cash.

United so badly need a fit-for-purpose midfielder and it seems clear that Pogba won’t put himself out for Ole Gunnar Solskjaer this season. The Red Devils really would be better off taking the deal – either one – and moving on. But, Woodward…

The Daily Mail reckons the Gunners have joined the race for Norwich youngster Max Aarons. A few issues here: Mikel Arteta needs centre-backs, not a right-back who might be loaned back to Norwich for the rest of the season anyway. And Tottenham are leading the race for the £30million-rated teenager.

Jerome Boateng is certainly closer to what Arsenal are looking for. The Bayern Munich centre-back is up for grabs this month for as little as £12.8million and the 31-year-old’s versatility would certainly improve Arteta’s options.

The Evening Standard says Arsenal have switched their focus to Boateng because their primary target Dayot Upamecano may be unattainable. The Gunners were quoted £70million in the summer and RB Leipzig are no more keen to sell since they sit at the top of the Bundesliga table at the halfway point of the season.

AND THE REST
Leicester have had a £25million bid for Merih Demiral rejected by Juventus… Christian Eriksen is close to joining Inter Milan… Borussia Dortmund won’t sell Jadon Sancho this month… Chelsea, Palace and Brighton are all keen on CSKA Moscow striker Fedor Chalov… Aston Villa could move for Burnley back-up keeper Joe Hart… Real Madrid are closing in on Flamengo’s teenage midfielder Reinier… AC Milan are set to complete the signing of Jean-Clair Todibo from Barcelona.