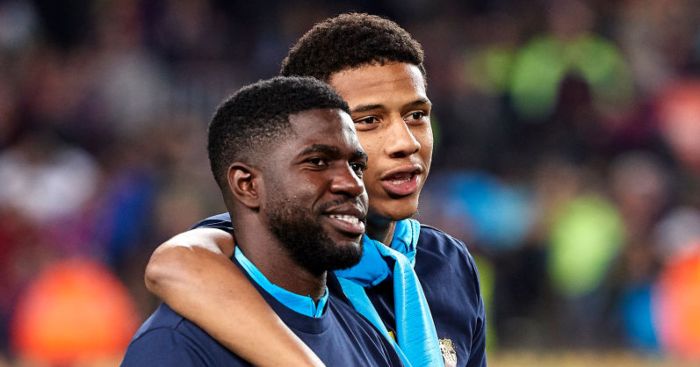 ANOTHER MAN FOR UNITED
Manchester United are clearly bored of being taken for mugs. On Monday, it was suggested that they have tried to sign Ruben Dias of Benfica for €66m (£60.5m) – a relative bargain fee in comparison to Harry Maguire’s £90m valuation.

By Wednesday, we are being told that they ‘would be willing to offer’ €50m (£45.8m) for Samuel Umtiti of the Barcelonas. Le10Sport claim ‘a reconciliation could therefore be quite possible’ as the Spanish champions want a perfectly reasonable €60m (£55m).

‘Discussions have even started’ between the two parties, but Ole Gunnar Solskjaer ought to be wary: the centre-half is also ‘in the sights of Manchester City’. The Premier League winners have made their interest known ‘without taking action’.

DOWN TO THE (MAG)WIRE
There is a Maguire update, of course. And that is that there is no real update: the Daily Telegraph report that the move ‘is threatening to drag into the final week of the transfer window,’ which is just literal fact. It’s eight days until the deadline.

Things are pretty much as they have been for a while. Maguire wants to leave but won’t kick up a fuss. Leicester will let him go if they receive at least £85m. United ‘are still some way from making any progress’. And we are all gradually losing interest.

KT ARSENAL
Just over a week after supposedly having to ‘walk away’ with tail between legs, Arsenal are seemingly closing in on signing Kieran Tierney. The Daily Mail say the Gunners are ‘restructuring’ their existing £25m offer to try and appease Celtic, who want a bigger initial payment.

It worked with Lille and Nicolas Pepe, but Arsenal’s most recent bid ‘fell £5m short’ of what the Scottish champions want. But Celtic are ‘willing’ to let Tierney leave if Arsenal pull their finger out – along with more money.

Unai Emery appears to have revisited the deal because he ‘needs defensive reinforcements’ due to injuries, wantaway captains and Shkodran Mustafi. So Tierney, who was reportedly earmarked as a centre-half by the Spaniard, is back on the agenda.

But is he the signing to complete a perfect summer at the Emirates?

AND THE REST
Paris St-Germain have vetoed Barcelona’s move for 27-year-old Brazil forward Neymar… Arsenal are closing in on a deal for Celtic and Scotland left-back Kieran Tierney, 22… Inter Milan and Argentina striker Mauro Icardi, 26, could be heading to Napoli in an 80m euros (£73m) deal… Crystal Palace have made a bid of about £14m for CSKA Moscow and Russia’s 21-year-old striker Fedor Chalov… West Brom have received no offers from Aston Villa for Scotland winger Matt Phillips, 28… Newcastle and England Under-21 goalkeeper Freddie Woodman, 22, is a target for Celtic and Arsenal, plus two unnamed Championship clubs… Newcastle have had a £4.5m bid for Amiens and Sweden’s 24-year-old right-back Emil Krafth rejected.