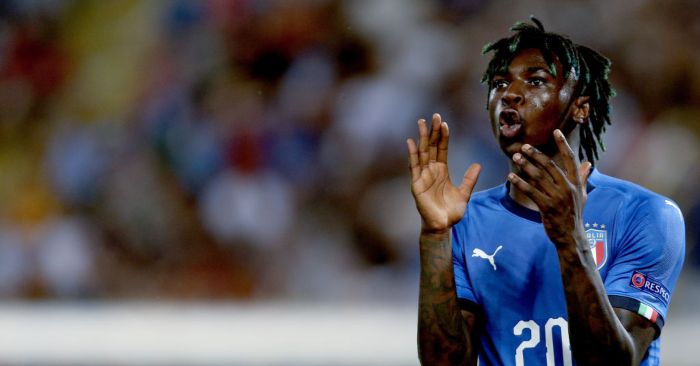 UNITED FRONT
That Manchester United’s ‘focus between now and the transfer deadline is to secure a top class centre back’ should come as no surprise. But the London Evening Standard’s update on Paul Pogba – who they absolutely “do not have to sell” – contains a nugget of information on two supposed midfield targets.

‘Senior United sources have dismissed links with Tiemoue Bakayoko and Mario Lemina,’ writes James Robson, ‘but Solskjaer is running out of time to strengthen in that department.’

Sorry to ruin your Wednesday mornings, United fans, but neither £40m Chelsea flop Bakayoko nor £18m Southampton outcast Lemina will be headed to Old Trafford this summer. Sean Longstaff is your £50m consolation prize.

BRING ON THE MOISE
This summer’s big Premier League movers will be Everton. They are bloody well ‘keen’ on Moise Kean (lol) in their search ‘for a new forward to lead the line’.

Juventus intend to extend the 19-year-old’s contract to 2024, presumably to increase his value before selling him on. They also wish to include a buy-back clause in any sale, allowing them to re-sign him for £40.5m.

Everton are ‘one of the sides chasing his signature,’ safe in the knowledge that they could bring in ‘one of the hottest young prospects in Europe’ for £31m, help develop his talents for a season then lose him for a fraction more when Juve decide they want him back.

This is all according to the Daily Mail, who say ‘the Turin club think a £31m deal makes financial sense’. Perhaps for them, but for Everton?

WILSOOOOOOOON
An alternative to Kean could be Callum Wilson, who Bournemouth are reluctant to lose.

The Sun say the Cherries will offer the England international a five-year contract ‘worth £26m’, which equates to £100,000 a week. They know West Ham, Everton and Chelsea are interested so are willing to give him the biggest contract in the club’s history.

West Ham ‘are ready to offer £35m’ after missing out on Maxi Gomez to Valencia, while Everton ‘have joined Chelsea in the race’, too. The Toffees might need to sell Idrissa Gueye to fund the move, but still.

MENTAL DELPH
Gueye leaving means a replacement must be sourced. Which goes some way to explaining why Everton ‘are one of a number of clubs looking to sign’ Fabian Delph.

Sky Sports News say there is ‘significant interest’ in the Manchester City midfielder, who ‘has been told he can leave the club this summer’. That claim contradicts the Metro, who say Delph ‘will have to request to leave’ as City are ‘keen to keep’ him.

The Metro add that Delph, with one year left on his contract and made pretty much surplus to requirements by the arrivals of Rodri and Angelino at City, is valued at ‘around £16m’. They ‘see little reason to let him go on the cheap’ and ‘are willing to let Delph run down [his contract] if a suitable offer is not made’.

MY EMPIRE OF KURT
The Guardian carry a similar line on Everton’s Delph interest, claiming that he is one of ‘several more additions’ Marco Silva would like. ‘Chief among them’ is Kurt Zouma on a permanent basis.

After impressing on a season-long loan from Chelsea this past season, the centre-half is a known target for the Toffees this summer. Marco Silva said he was “hopeful” of signing the Frenchman, but Chelsea’s transfer ban could complicate matters.

It was claimed at the start of the month that Chelsea would hold out for £30m to sell the 24-year-old. This would all represent another fine Everton summer.

AND THE REST
Barcelona have turned their attention to Manchester United’s Sweden defender Victor Lindelof, 24, with Ajax and Netherlands centre-back Matthijs de Ligt, 19, set to choose Juventus… Paris St-Germain will want 222m euros (£200m) from Barcelona if they are to sign Brazil forward Neymar – the same fee the French club paid the Spanish side for the 27-year-old… Real Madrid will have to pay a record fee of about £162m to sign France midfielder Paul Pogba from Manchester United… Bayern Munich are still interested in signing Germany winger Leroy Sane from Manchester City, despite the 23-year-old’s £90m asking price… Arsenal have been offered the chance to sign Real Madrid’s Dominican Republic striker Mariano Diaz, 25, for a reduced fee of £18m… West Ham have been offered Marseille’s Italy striker Mario Balotelli, 28, on a free transfer as an alternative to Wilson and Gomez… Liverpool are optimistic that Belgium forward Divock Origi, 24, will agree a new contract at Anfield… Crystal Palace are close to signing Swansea’s 27-year-old Ghana forward Jordan Ayew, who spent last season on loan at Selhurst Park.