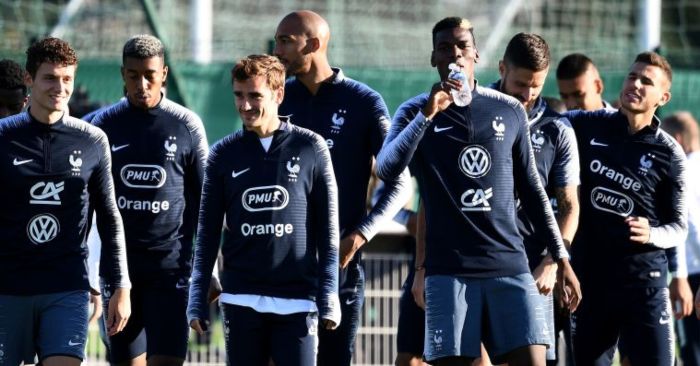 MIRROR, MIRROR
Real Madrid have spent more than twice as much as any European club already this summer. Yet Zinedine Zidane is still without his reported top target. He will not rest until Paul Pogba rocks up at the Bernabeu.

It will certainly cost them. A Daily Mirror exclusive claims that ‘a bid of around £135m’ is being planned for the midfielder, but even that might not be enough. Manchester United will ‘dig their heels in’ and wait for at least £150m to be faxed through.

Pogba is ‘disillusioned’ with life at Old Trafford, but United are ‘reluctant’ to lose him. Not even the temptation to make a profit on a third player since 2009 appeals to them. Weirdos.

They do hold all the cards. Pogba is under contract until 2021, and United of course have the option of adding another year to that. Having signed him for £89.3m, they won’t be settling for anything less than their biggest sale ever, trumping the £80m Real themselves spent on Cristiano Ronaldo ten years ago.

ALL FOR ANTOINE
How will they spend that money? On someone already pretty much confirmed to be joining Barcelona.

You have to appreciate the hustle of The Sun, who spot an opportunity and exploit it to the fullest extent. Despite Atletico Madrid chief executive Miguel Angel Gil Marin stating that Antoine Griezmann “will play for Barcelona”, and that the club have known since March, they say United will ‘make a last-gasp bid’ to sign him.

The exclusive suggests United will ‘smash their transfer record’ to spend £95m on the Frenchman and capitalise on Barca’s ‘failure to make an official move’.

While the lack of Champions League football is a ‘significant problem’ in this hijacking, United’s willingness to match his £450,000-a-week wage demands will help smooth out any kinks in the deal.

Of course, there is literally no chance of this happening. He is actually joining Barca. We will eat all the hats if he’s lining up alongside Scott McTominay next season – and Ernesto Valverde’s side definitely can’t afford him.

I GOTTA BALE
In more realistic news, United have finally realised that Gareth Bale isn’t quite as good as he was in 2012. So they ‘have finally ended their pursuit’ of the winger.

Real have made Bale ‘available’ for either a loan or a permanent deal this summer, but United have ‘rejected’ the chance to move for one of Ed Woodward’s four fantasy signings.

The executive vice-chairman will instead focus on Ole Gunnar Solskjaer’s request for young, homegrown talent, starting with Bale’s compatriot Dan James. Even with Jadon Sancho out of reach, the manager is ‘reluctant’ to turn to a 29-year-old with injury issues as an alternative.

AND THE REST
Manchester City manager Pep Guardiola has dismissed suggestions he is considering taking a break from football at the end of next season… Liverpool have renewed their interest in Lyon playmaker Nabil Fekir but will not pay the £53m fee they agreed with the Ligue 1 club for the 25-year-old France international last summer… Juventus sporting director Fabio Paratici has arrived in London to conclude a deal for Chelsea’s Italian manager Maurizio Sarri… Chelsea defender Emerson Palmieri has been linked with a move to Juventus but the 24-year-old Italy international says he is happy at Stamford Bridge… Matthijs de Ligt’s agent Mino Raiola has met Paris St-Germain sporting director Antero Henrique over the transfer of the 19-year-old Ajax and Netherlands defender. The clubs are close to reaching an agreement of around 75m euros (£66.6m)… French champions PSG have offered De Ligt a a five-year deal worth 12m euros (£10.6m) a year.

West Ham are close to signing Villarreal attacking midfielder Pablo Fornals, and a £24m deal for the Spaniard could be completed by the end of the week… Tottenham’s pursuit of Lyon and France midfielder Tanguy Ndombele, 22, is being complicated by his 75m euro (£66.6m) price tag… Chelsea will not take up the option to buy Croatia midfielder Mateo Kovacic from Real Madrid. The 25-year-old is instead set for a return to Inter Milan… AC Milan are interested in signing Liverpool’s Croatia centre-back Dejan Lovren, 29… Liverpool would only consider letting Lovren leave if they receive an offer of at least £25m for the defender.